The curious incident of the changing dates and content of web pages.


After the late-night release of the bill, the following day, Tuesday February 6, while the Senate was still creating its version of the budget package, AOTA reached out to our Congressional champions to oppose these provisions, and, alongside the American Physical Therapy Association, proposed alternatives to the OTA provision—alternatives that would have stopped its adoption or minimized its impact. Additionally, on Tuesday AOTA changed all grassroots advocacy messages related to the repeal of the therapy cap, to include details of the OTA payment changes.


This was surprising to me because I read every available piece of documentation on this as it was unfolding and I did not recall seeing any such messaging.  In fact, I was so distressed that AOTA did not inform anyone that I wrote a blog post about it.

When you see something that you did not see previously the initial response is to question your own recollection.  How did I not see all of that information?

There is a lot of new detail and information that I just don't remember seeing there before.

I did not save the original web pages and they are not cached so I can't prove anything.

However, I believe that this web page dated 2/7/18 entitled 'Understanding the Proposal to Change OTA payments' has edits and changes to it.

By my recollection there is information on that page today about OTA pay differentials that was not there previously.

What is concerning is that my original recollection is that AOTA did not mention the OTA pay differential except in a vague response to a Facebook post.  That gives the appearance of burying the lead - because they should have told everyone in BOLD LOUD MESSAGING.  Instead, is it possible that they knew about the OTA problem but they did not LEAD with that messaging to the members? 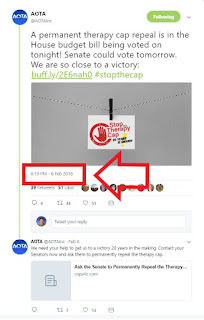 Now go and navigate to the URL that they link: buff.ly/2E6nah0

It will take you to the following page. On this page you can scroll down to the original content, dated 2/6. However, the information about the OTA pay differential is allegedly dated on the following day (2/7) and as noted above the metadata for that page is 2/12. 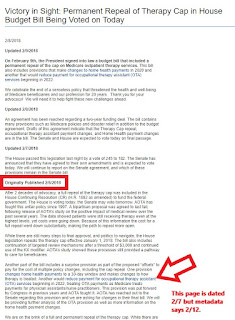 I document all of this for the community because to me it appears that the pages and the dates do not match up.  It is not possible to link to an article that was not written until the next day.  The dates just don't match up.

Most importantly, none of this matches anyone's recollection of what information was shared.

1. Why is this information on the OTA differential that previously no one saw only published on AOTA pages and not mentioned in their primary social media messages?

2. If this OTA payment differential was so important, why didn't AOTA mention it anywhere on their Twitter feed? or on Facebook?

3. Factually, the first time that there is any reference to this on any AOTA pages is LATE on Tuesday night.  A couple of eagle eyed OTAs asked about it on Facebook that evening and they got a vague response.  Even so, this is all buried in a response on a Facebook page - not distributed to practitioners.

5. Why does a page that was reportedly written on 2/6/18 have a link to a file that reportedly was published on 2/7/18 but whose metadata actually indicates modification on 2/12?

6.  As previously documented, the pay-fors may have been published to the web as early as 1/30.  Understanding that some of this is not broadly distributed, it is still concerning that this was missed.

7. Where is the memorandum of opposition to the OTA pay-fors?

From what I can tell, AOTA was reportedly informed of the OTA differential on Monday evening.  There is no evidence that anything was posted about it until Tuesday evening.  On Tuesday evening something was published - it was noticed by a couple OTAs and they asked a question on Facebook that was not directly answered and was buried on the page.  On Wednesday a couple more people noticed it and asked, again getting oblique answers.  None of it was ever included in the main messaging from AOTA.  Then on Thursday, news broke broadly about the OTA differential.  By then it was too late - the OTA issue was embedded in the bill, scored by CBO, and it was all over.

All week AOTA asked people to advocate and their primary messaging did not have any information about the OTA differential.

Now AOTA is claiming that they informed everyone about this as soon as they knew.

This is a curious claim based on the published content in their Facebook and Twitter messages.  To the degree that they mentioned it at all, it was only obliquely referred to on their website, and now those web pages that they have control over appear to have new information, and none of the creation or link dates match up.

Most importantly, the Twitter feed and Facebook page can't be altered, and they represent the truth about AOTA's efforts to inform the field.  They really didn't, in my opinion, except if you want to count burying a response deep on a Facebook page as 'notification.'
health insurance OT practice