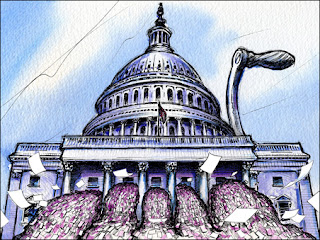 It is commonly stated that the process of legislating is like making sausage - you generally don't want to see how it happens.

The therapy community was recently disappointed with the announcement that facilities would have to code their Medicare B claims with a modifier and would receive payment at 85% of the standard rate whenever that therapy was delivered in whole or in part by an OTA or PTA.  This is hard coded into legislation - and is not a rule or regulation.  For reference, this is included in the legislation that has been called "The Bipartisan Budget Act of 2018."

The addition of this requirement was included in the recent legislation as an offset to the cost of repealing the Medicare therapy caps.

Professional associations like AOTA have stated that they were surprised by a 'last minute' inclusion of payment differentials that they report to have learned about on  February 5, 2018.  Since the AOTA employs a professional staff of lobbyists and legislative policy experts it is reasonable to wonder how they could have been surprised at this very late stage in the process.

When bills are being created, they are passed through 'committees' of the House and Senate.  These committees are composed of legislators who are responsible for 'fine tuning' legislation to the point that it is ready for a vote on the floor of the legislative body.  It is common practice for legislation to be passed to the Congressional Budget Office where it can receive a 'score.'  In other words, there has to be some determination of how much a bill will cost.

So, there are many steps in this process of 'making legislation.'

The Bipartisan Budget Act of 2018 passed through the House of Representative before it went to the Senate.  The Rules Committee in the House in particular wrote a section by section summary that was supposedly published on the Internet on January 30, 2018.

It is unclear if this is correct though because the PDF metadata on the file indicates that it was written on February 5, 2018: 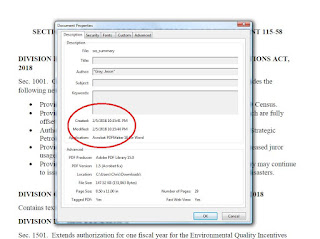 That is confusing, but sometimes Google gets dates wrong.  It is impossible to know.  Either way, Section 2707 of that summary is rather clear in stating: 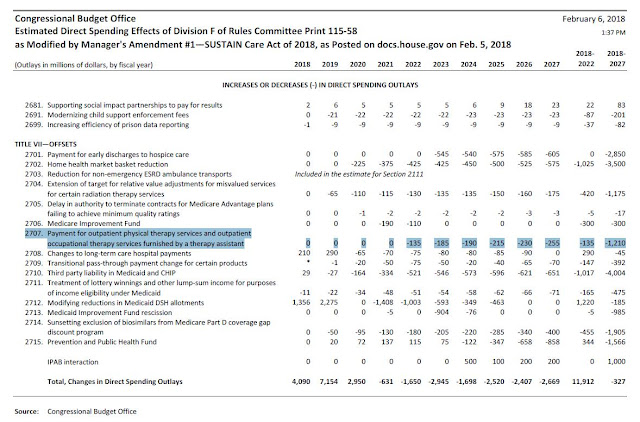 According to documents and publication dates, the language for therapy assistant payment differentials was introduced in the House Rules Committee.  After deliberation, it was included in a document summary, printed, and then sent to the CBO for scoring.

Why the differential payment language was not noticed by the association professionals responsible for monitoring this legislation until so late in the process is a question that needs to be answered.

The following members of the House Rules Committee are direct beneficiaries of money donated by AOTPAC - the political action committee operated by AOTA:

It seems logical to believe that the legislators supported by AOTPAC, and those same legislators who are on the Rules Committee where important legislation is being deliberated, might be called upon by the AOTA lobbyists and legislative policy experts as the process unfolded.  Apparently, based on the outcome, something broke down with that process.

The compounded but separate concern is that associations learned about the payment differential language and failed to broadly alert the therapy community until the day of the Senate vote.  That is a separate matter that also still needs explanation.

BACKGROUND: Read here for the timeline on the 'Stop the Cap' effort.
health insurance OT practice