This week's timeline for the #StopTheCap effort 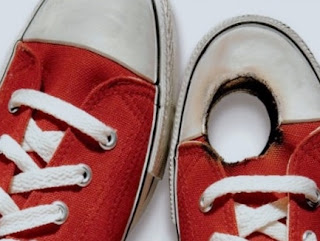 Thanks to the efforts of the American Occupational Therapy Association, beginning in 2022 occupational and physical therapy assistant Medicare reimbursement will be cut by 15%.  Oh, and they solved the cap problem for PT and speech therapy by doing so.

Per a CBO report from February 6th, 1.2 billion of the 6.45 billion cost to repeal the therapy cap would be offset by the reimbursement changes.

Let's get the background here.  Therapy caps have been in place for many years, and for nearly every year there has been an exceptions process that worked around the cap.  This was a bigger problem for PT and speech, who because of a misplaced comma (so the mythology goes), had to share one cap while OT had its own cap.

The exceptions process worked to solve this problem for many years.  Several members of the OT community tore this issue apart and discussed it ad nauseum on the OT Connections site to help educate students and members about Medicare reimbursements.  None of that conversation ever changed the relentless drumbeat of the AOTA policy to 'Stop the Cap' - an effort that addressed the needs of PT and speech therapy much more than it had any impact on OT.

That is unfortunate, because if anyone stopped to read the wisdom in those OT Connections threads then all of this might have been averted.  That conversation happened in 2013 and I have been advised that it is still archived on that site.

Fast forward 5 years, and the annual call to 'Stop the Cap' came up again.  Now since eliminating the cap will cost the federal government $6.45 billion dollars that money has to be 'paid for' in some way.  In simple terms, Congress operates on a 'pay as you go' philosophy so as not to add to the federal deficit.  Here is some information about that process.

So when AOTA was lobbying to 'Stop the Cap' there should have naturally been some conversation about how it was going to be paid for.  Today we learned that it will be paid by cutting reimbursements for care provided by OTAs and PTAs.  When I asked some of the AOTA staff about this today they stated that 'it took them by surprise.'

If it is true that it took them by surprise, it represents negligence at the highest level.  Why didn't AOTA ascertain how their 'Stop the Cap' project would be funded?  That is an important question.

The OT community foolishly trusted that AOTA would advocate in their best interest.

This is the truth of the timeline of the last week:

According to a letter reportedly written by AOTA President Amy Lamb and distributed to program directors, “The change in payment for OTA services is a proposal that we first saw in relation to this most recent continuing resolution on Monday night.”

So in other words they knew about this Feb 5.

Let’s go read twitter and see what AOTA talked about on Tuesday Feb 6 - AFTER they knew about this problem. 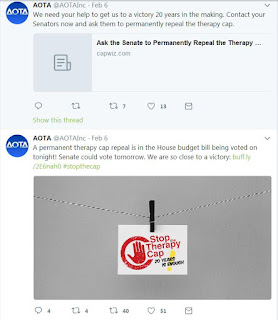 Oh, and let’s see their messaging on Feb 7. 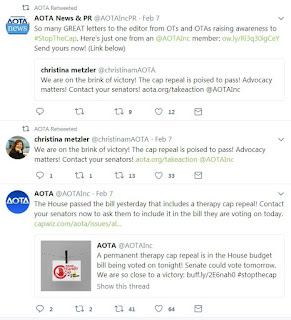 On February 7th, two days after learning about this problem, AOTA actually linked to a letter to the editor that an OTA wrote and held it up as an exemplar of what everyone should be doing.  While this OTA was getting a letter published in their paper, AOTA KNEW ABOUT THE REIMBURSEMENT CUT.

Then on Feb 8, THE DAY OF THE VOTE, after promoting a bill that they knew was damaging to OTAs – something they knew for 3 days, they stated that they didn’t see this coming and it took them by surprise.

So OTAs have just bought a cap repeal for PTs and STs and sacrificed their pay and jobs for that outcome.

This is the actual timeline of events since AOTA reports learning about this issue.

I think that the community has a right to ask some questions.

Unknown said…
Thank you, Chris, for taking the time to break this down and really explain the pros and cons. It makes much more sense now. Do you think some of the cost will be recouped by additional needed services by OTAs.

Example, an OTA seeing a client for 5 extra visits? Is that worth the 15% cost?

Christopher J. Alterio said…
That is a great question.

You will notice that the requirement to use the KX modifier is still in place. I believe that this is so there can be a mechanism for flagging claims that exceed a certain dollar limit. The review process will have to have parameters developed, and I suspect that CMS will use the KX modifier as a mechanism to flag claims, or perhaps to flag entities that exceed some pre-determined threshold on a regular basis.

The reality here (acknowledged by CBO) is that eliminating the caps will lead to increased utilization (costs). Profit-driven entities (often the large corporations but individuals are also capable of fraud) will see the release of the caps as a financial opportunity. CBO estimated that the cost of repeal would be $6.47 BILLION.

So releasing the cap will create a Wild West while the profiteers find ways to game the system and get more payments. CMS will respond with rules on the manual review process. It is the same hamster wheel of never-ending increased costs and burdensome utilization review that was created with RUGs in nursing homes.

Will profits be offset by increased utilization? Maybe - but is that what patients need? That is the largest question - and that is also why all the high-fiving about this being a 'win' for patients is a big lie. This hurts the consumers more than anyone. Their costs will go up, and they may be receiving more care than they need now that there is a profit motive to do so. We see that happen every time.

This situation is a classic case study in everything that is wrong with non-market driven cost control systems. It is a sad time for consumers.
2:00 PM