Showing posts from 2014
Show all

Time to update the AOTA Position Paper on Nondiscrimination and Inclusion

December 18, 2014
Politically controversial conversations continue to spew from the social media accounts of AOTA leaders.  These conversations represent perspectives that are not reflective of the broad membership and are highly partisan.  The steady stream of ideological thinking is concerning because it represents a pattern where some leaders don't know how to separate their personal political inclinations from the mission of a diverse professional association. We often associate topics of diversity and nondiscrimination and inclusion in racial or ethnic or religious perspectives.  However, in what is supposed to be a politically neutral environment like a professional association, we can also consider the negative impact that is caused when leadership adopts a partisan and biased political agenda. This is not a new problem with the American Occupational Therapy Association.  The inclusion of Social Justice in the Code of Ethics was the first major foray of leaders into political partisanship
1 comment
Read more

December 17, 2014
I got an interesting question in email today so I decided I would answer it publicly.  The email asked: You used to write a lot about early intervention, but there hasn't been much on that topic lately.  Providers are still struggling, there are provider shortages in some areas, lots of people lost their businesses and either went into agencies or gave up on early intervention.  Are you still working in this area and will you still be writing about how we are struggling with early intervention? Here is my answer: The reason why I don't write about early intervention as much anymore is because everything that I predicted about the municipal takeover of the system has come to fruition.  There just isn't anything left to say about it, and now the program will limp along in a reduced capacity just as planned.  The transition to the State Fiscal Agent system was intended to destroy the program as it was previously designed and that objective has been met.  In place of the
Post a Comment
Read more

The following Twitter conversation underscores the problems with use of a population health model in an occupational therapy context: Framing a conversation about the need for older drivers to consider their abilities underneath a context of population statistics is in direct conflict with the profession's Core Value of respect for patient autonomy and individuality. Although it may be true that there are descriptive statistics about driving safety, numbers of accidents, and other factors associated with elderly drivers, when we lead our conversations with talk about the broad population we are adopting a potentially ageist stance that restricts the freedom of many drivers who are not falling within those normative ranges. This is the problem with use of a population health model for meeting the needs of individuals.  To describe this problem within a general systems theory framework, consider the following chart: Within this traditional framework of intervention, the
2 comments
Read more

Pushing back against a 'Fourth Paradigm' in the occupational therapy profession

November 19, 2014
Occupational therapists have a century long tradition of identity confusion and that has been complicated by incrementalism in how the profession defines its scope of practice.  A significant victory against incrementalism was realized in the 2014 Fall Representative Assembly Meeting when the Philosophy of Education document that was proposed was not supported, but an amended document passed that removed references to the 'occupational needs of institutions.'  The amended document now reads: "Occupational therapy (OT) education prepares occupational therapy practitioners to address the occupational needs of individuals, groups, communities, and populations" The motion was to replace the word "institutions" with the word "groups" as individuals, groups, communities and populations have human occupational needs as OTs know and understand them, and it makes the language of the new document consistent with the Occupational Therapy Performan
1 comment
Read more

November 11, 2014
The American Occupational Therapy Association has a Commission on Continuing Competence and Professional Development (CCCPD).  The CCCPD is conducting a 5 year review of its standards on continuing competence.  This is a good opportunity to assess the AOTA efforts in this area. Links to the draft document and a survey can be found here: http://www.aota.org/Publications-News/AOTANews/2014/CCCPD-standards-review.aspx Here are my concerns with the document: 1. I find the document to be rather vague, and the standards are not evidence-based.  There is no citation that provides information on how these standards were established or how they were developed.  In comparison, NBCOT develops practice standards that are based on a Practice Analysis and they can be viewed here: http://www.nbcot.org/practice-standards 2. The standard on Knowledge is vague and self-referential: "OTs and OTAs shall demonstrate understanding and comprehension of the information required for the
Post a Comment
Read more

October 30, 2014
A new day, a new document, a new definition for the profession: For many years, the American Occupational Therapy Association has stated that students need to promote the profession by developing an effective 'elevator speech' explaining occupational therapy. This essay explains that the reason why students will be making elevator speeches for the next 100 years is because the leaders of the profession keep changing definitions about what OT is and who it serves. +++ There is a new draft document on The Philosophical Base of OT Education that is going to be debated and voted on by the Representative Assembly .  The current document was published in 2007. There are contrasting statements in the two documents.  From the 2007 document: Occupational therapy education promotes integration of philosophical and theoretical knowledge, values, beliefs, ethics, and technical skills for broad application to practice in order to improve human participation and quality of life f
3 comments
Read more

Comments on 'Validity of Sensory Systems as Distinct Constructs'

October 21, 2014
Chia-Ting Su and Diane Parham (2014) wrote an interesting article that appears in this month's American Journal of Occupational Therapy.  Their study involved use of confirmatory factor analysis to test constructs within sensory integration theory.  Results of their analysis have rather broad implications and raise many important questions. A highly popularized notion based on Dunn's (2001) Slagle lecture is that sensory processing can be identified as occurring within different systems where there might be over or under responsiveness to incoming stimuli.  Su and Parham applied data to this model and could not confirm that this conceptualization fit their data.  This in itself is a significant finding because it puts into question whether or not SOR/SUR models are the most appropriate way to explain problems with sensory processing. Also germane to this finding is the concern that tools like the Sensory Profile confound analysis by including questions about temperament th
Post a Comment
Read more

October 13, 2014
The lynchpin of this conversation goes back to the patient v. client debates which quite clearly have not been resolved.  I think it is important to look at those issues very carefully.  Client-based ethics are simply different than patient-based ethics, and the more that we walk down paths of client-based ethics the more risks we take of straying too far from our roots, as we were clearly warned by Reilly (1984) and Yerxa and Sharrott (1985). It should be very interesting to note that the entire argument for client-based ethics as originally made by Herzberg (1990) revolved around the allegedly 'faulty' logic of Reilly, Yerxa, and Sharrott. Herzberg stated that the term ‘patient’ implies that people are sick.  She also argued that using the 'patient' term removed autonomy, limited participation, and restricted our roles in mental health and wellness.  She made that claim in 1990, and I would argue that nearly 25 years later of client-based ethics that our roles and
Post a Comment
Read more

Investigation into the Mendability program

October 09, 2014
On a professional occupational therapy forum some participants were asking for more information about the Mendability program, which is a 'sensory enrichment' therapy for autism.  I decided to post my response here for broader distribution. +++ Here are some additional resources so  people can learn more about Mendability. Kim Pomares and Eyal Aronoff are the co-founders of Mendability.  Pomares is a Social Media and Content Development Creator and Aronoff is co-Founder of Quest Software.  It does not appear that they have any clinical training in autism or any kind of therapies that I could find. Pomares' mother reportedly has the "clinical" ideas behind the program: "The theory behind Mendability originated out of France by Pomares’ mother. He said she came to Canada to train nurses in hospitals to do this therapy, but she only had an idea and needed scientific evidence for validation. After extensive research efforts, he secured the m
Post a Comment
Read more

Why OT Rex is an appropriate mascot for the OT Profession 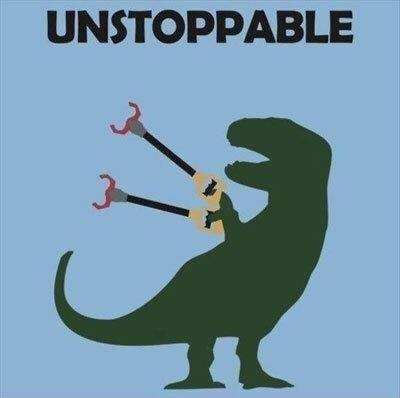 This picture, and some similar to it, were widely passed around social media within the last year as an expression of the occupational therapy profession.  The picture is a play on the humorous limitations of T-Rex, and how adaptive equipment presumably supplied by an OT could help him with his 'reach.' There have been discussions on social media sites about the divide between academia and clinical practice.  This is not a new debate but it has become more important as the profession discusses a possible switch to a doctoral degree for entry level practice. One primary criticism is that that AOTA Ad Hoc group that came up with the recommendation was populated almost entirely by academics.  It is an undeniable reality, and underscores a problem with not properly consulting all stakeholders before publishing a position statement. Unfortunately, constricted regard for feedback continues.  The AOTA Board of Directors announced that there would be opportunities for members
Post a Comment
Read more

When your legacy is OT education and the Sarbanes-Oxley Act

September 23, 2014
I support free market capitalism, and respect ownership rights people have in the money they have earned through voluntary trade.  Since the money belongs to them they should be able to spend it or give it away at their own discretion. This week we all learned that the University of Southern California Division of Occupational Science and Occupational Therapy received a $20 million gift from the Chan family.  The gift creates the first named and endowed occupational therapy program in the nation, according to the school's website. The article states that USC is a pioneer in occupational science and occupational therapy.  An interesting feature of occupational science is that it purports to be an interdisciplinary field that is intended to inform the occupational therapy profession by providing basic research knowledge about the occupational nature of human behavior. Since the inception of this 'new science,' several scholars have pursued studies relating to the social
Post a Comment
Read more

Basic vs. applied science: The ongoing OT and OS debate

September 09, 2014
Over the course of the last several years an important professional debate about social justice has been occurring in the occupational therapy profession. That actual debate started innocently by a student who posted a question in the Public Forums on OT Connections who was interested in conversation about an RA motion to remove Social Justice from the AOTA Code of Ethics.  That student disagreed, stating that she did not think that Social Justice represented a single political philosophy and that it should not be removed. Some leaders in the occupational therapy community voiced their support of the student's position, stating that social justice is not reflective of a singular political ideology and should not be re-framed as such.  There was near immediate disagreement, with other AOTA members expressing that it does represent a single political ideology. The basis of the eventual RA vote that supported inclusion of Social Justice was made on the questionable premise tha
4 comments
Read more
More posts