Showing posts from August, 2009
Show all

A subjective conversation about the issue of grade retention 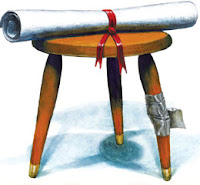 My occupational therapy practice is sometimes as much about parents as it is about children - and in fact the two are so intertwined that making the distinction is irrelevant. We get questions all the time about parenting decisions - and as these are directly related to both parenting and childhood occupations we try to help. Summertime is famous for conversations about retention. I have read all the studies - but won't list them here because they may not apply. Still, the studies state that there is sometimes temporary/immediate benefit to grade retention but that those benefits disappear in subsequent years. The problem with the studies is that they are done on such a large and heterogeneous group that it is difficult to say exactly who these results apply to. Parents and teachers and administrators get lost in the issue because they inject all kinds of ancillary concerns including what will it mean if he is the physically largest child in the class? is it true that the ext
Post a Comment
Read more

tree frogs and coming to grips with a diagnosis of autism

I saw Jason today whose family has not yet acknowledged his autism. They will soon, as society will not allow them to continue explaining away his stereotypical behaviors for much longer. For now, from the perspective of his family, "he loves to jump and wave his hands!" and "he just doesn't like to talk much." and "he loves rocking in that rocking chair!" It is all fine; it is not my job to cram some doctor's provisional diagnosis down the family's throats. I don't even pretend to know how difficult it must be for parents to come to this kind of acceptance - but I frequently see how long it takes to get there so I can imagine that it is not an easy path to walk along. Anyway, I was intrigued today while I was listening to his grandmother make many assumptions about Jason's behavior. Jason walked near the refrigerator and the grandmother interpreted this as him wanting a bottle because she believes that he is emotionally regressing s
Post a Comment
Read more

August 04, 2009
Nearly three years ago I offered to work for NYS for free to help tackle the problems of Medicaid fraud for special education services (see http://abctherapeutics.blogspot.com/2006/06/new-york-states-medicaid-problem-in.html). The system needs reform badly - and although I never expected to be asked to serve I was actually quite sincere in my concern and desire to effect some improvement in the system. As I predicted back then, there would eventually come a day of reckoning to pay for the fraud and abuse - and it seems that we are at that day. In today's Albany Times Union, reporter James M. Odato informs us that the New York State Education Department is withholding Medicaid payments to school districts in accordance with a settlement agreement that has NY State paying out hundreds of millions of dollars back to the federal government. Also as predicted, this leaves school districts in quite a pickle - because they are still mandated to provide these services by law - and now
1 comment
Read more
More posts