Showing posts from January, 2015
Show all

January 22, 2015
Follow up to PTE Speech in 2012: Ways you will be paid . I said in that speech that "The people who need you the most might not be able to pay you the most."  I thought about that this morning, because several things that I did are not 'reimbursable.' The idea of my talk to those students was to tell them that over the longer course of their careers that it is likely that they will make enough money to repay their student debt, but that it would be short-sighted to measure success in monetary terms because sometimes the ways you are paid can't be identified as a quantifiable amount in your Account Receivables, or it might not be noticed by the widget counters that reside in the Halls of Productivity, Outcomes, and Cost-Control. This morning a mom called to cancel their appointment, and then asked sheepishly, "I have a question, and I hope that you don't think it is silly.  My son deleted his Minecraft world and do you have any idea how we might be a
Post a Comment
Read more

The hands of a pediatric occupational therapist 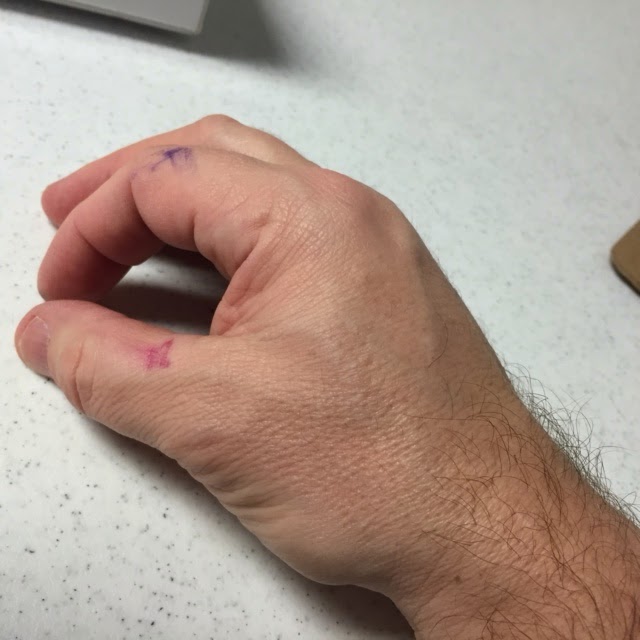 When I get home from work I have things to do, like everyone else, and sometimes those things make my hands dirty.  Sometimes it is some minor maintenance on my car, or repairing something in the house, or doing a little gardening.  I know that I have to scrub my hands clean after these activities so that there is no evidence of dirt or paint or grease.  I keep my fingernails very short for precisely this reason. What would I tell a parent the next day - that I have the residual stain of grease on my hands because I was elbow deep into my engine compartment the night before?  I suspect that most parents would understand, but it would not feel comfortable.  If you work on cars or paint a room you know how difficult it is to remove all traces of those occupations from your hands. Cultural stereotypes abound surrounding the nature of a person's hands.  We even have idiomatic language about 'getting your hands dirty.'  This is a positive concept that means someone is not af
Post a Comment
Read more

The impossibility of standardized international theory in occupational therapy

January 14, 2015
I was interested to read the comments of Dr. Moses Ikiugu who is a candidate for AOTA delegate to WFOT.  His full post addressing the AOTA's future priorities in context of the Centennial Vision can be found here . First of all, I would like to thank Dr. Ikiugu for sharing this thoughts because this is an important topic and not all candidates take the time to document their positions. One of his more interesting comments was a call for WFOT to develop and support  theory-based clinical decision-making.  He states: The hallmark of professionalism is the ability to explain how what we do in the process of providing our services works to address the problems that are within our domain of practice. This explanation usually comes from the theoretical base of the profession. That is why we should develop a strategy to ensure that theories that guide occupational therapy practice are clear and every occupational therapy practitioner in the world can use such theories to guide
Post a Comment
Read more

Attending to the Manifesto: The importance of idiographic data collection in pediatric occupational therapy

January 13, 2015
The occupational therapy profession is unique because it is positioned as a stepping point to help people escape the despair of a liminal disability state and move toward the function that people wish to achieve, for themselves or for their children. I have written previously on the occupation of writing and the notion of interactivity through written text.   I have come to understand over time that parents are Manifesto-writers, often taking pen to page to attempt to make sense of their parenting occupations.  I frequently evaluate children and in that context am handed Manifestos of parents who have so much to say and want to be sure that their message is adequately conveyed during what they perceive as an all-critical evaluation process. The evaluation is a moment in time that is pulled outside of the stream of other normal interactions and it is often elevated in contextual importance.  The parent may have expectations that the evaluator is expert and many hopes are precarious
Post a Comment
Read more

The professional abandonment of people who have developmental disabilities

January 09, 2015
Last year I bumped face first into a gnawing problem.  I was discussing practice trends in a professional context with an impressive panel of colleagues who were subject matter experts.  I raised the topic of the role of OT in planning transition services for adults who have developmental disabilities, and the more general topic of services to adults who have developmental disabilities was bantered about. My own personal perspective is that OT has a critical role in providing services to this population, and in fact concerns about adults who have developmental disabilities have been discussed in this blog more    than    a    few    times .  The problem I ran into is that among the opinions of the subject matter experts who represented diverse geographies around the country, not all could confirm that occupational therapists were an important part of the care plan for this population.  In some contexts, subject matter experts indicated that it would be a potential role for OT, and
1 comment
Read more

Reflections on inclusiveness for those who would be leaders

January 09, 2015
I was interested to read Dr. Braveman's blog post yesterday on Triple Aim.  In that post he stated "What did surprise me was the call for volunteer leaders to stop sharing their opinions and perspectives on such issues with the rationale that the issues can be interpreted by some as political and partisan."  You can read the whole post at http://otconnections.aota.org/community_blogs/b/brentbraveman/archive/2015/01/08/why-we-should-hear-more-about-health-policy-issues-such-as-the-triple-aim-of-healthcare.aspx He doesn't reference what 'call' he was referring to, but I would like respond to that statement because of the statements I have made on that topic.  I am not aware of any other statements on this topic, but if there was some other 'call' I would like to read it. In any event, related to my postings, I am not aware of any statements I made that could be reasonably interpreted as a call to stop sharing perspectives on issues - what I have '
Post a Comment
Read more

Enough is enough: Stop the politicization of the American Occupational Therapy Association

January 06, 2015
A recent article published in the American Journal of Occupational Therapy furthers the politicization of the professional association by issuing another full-throated endorsement of the Institute for Healthcare Improvement's 'Triple Aim.'  Leland et.al. (2015) state that "Failure of the profession to clearly demarcate what constitutes high-quality occupational therapy and demonstrate its contribution to the broader patient outcomes that value-based care will measure may marginalize occupational therapy in the rapidly changing health care environment." Unfortunately, the authors align the concept of 'value' with the IHI 'Triple Aim' that includes "improving the individual experience of care; improving the health of populations; and reducing the per capita costs of care for populations." (Berwick, Nolan, and Whittington, 2008).  These objectives sound quite noble, but they break the primary social contract that health care providers ha
Post a Comment
Read more
More posts