Showing posts from December, 2015
Show all

How history repeats itself when we plan for OT Anniversaries! 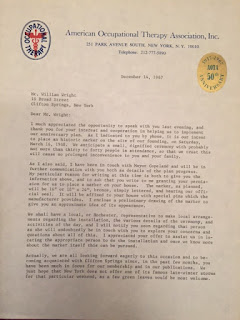 Near the beginning of this series on the history of the occupational therapy profession I documented how many of the details about George Barton and Consolation House were beginning to fade.  A concerted effort near the 50th anniversary of the profession helped to preserve some memory and connection to Consolation House, but planning for this event was very complicated. I was excited today to hear that there was some beginning plans to commemorate the occupational therapy Centennial by having some ceremony or re-dedication plaque in Clifton Springs.  This is all in the beginning stages of planning, but it reminded me about the initial plans to celebrate the 50th anniversary in Clifton Springs.  I thought I would share some of the source documentation that went into that planning. During the planning stages for the 50 year celebration the Consolation House was privately owned by Mr. William Wright.  Here is a letter that was written to Mr. Wright from AOTA President Florence Cromwe
Post a Comment
Read more
More posts