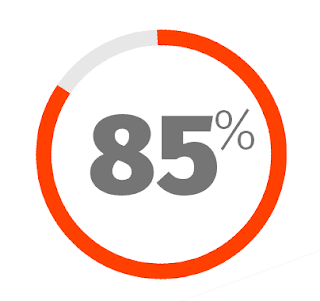 Last year I wrote several blog posts about the devastating advocacy position taken by AOTA to remove the Medicare therapy caps that caused a 'paygo' impact on services provided by occupational therapy assistants.

In short, the Bipartisan Budget Act of 2018 lifted the Medicare therapy caps and was 'paid for' by an agreement that OTA services under Medicare Part B would have to be paid at 85% of the standard rate whenever that therapy was delivered in whole or in part by an OTA.

Professional lobbyists and policy analysts at AOTA were surprised by this 'last minute' inclusion of a payment differential even though the House Rules Committee clearly included this language in the document summary that was sent to the CBO for scoring prior to the legislation being passed.  As a result of their inattention, no one was alerted to this dangerous language, no one could advocate against it, and OTA practice was severely damaged.  It was a colossal and inexcusable policy and advocacy error.

After this all happened, I clearly stated my fear about what would happen next (emphasis added):

Who pays for all of this?

OTAs who suffer an offset that includes a pay differential for their services, which has a real possibility of spilling over into other payment systems.  We don't yet know what the home health offsets will do.


One year later, we see the prediction coming true.  Note this letter from an insurer, that is NOT Medicare, announcing that OTA services will now have to be coded distinctly. 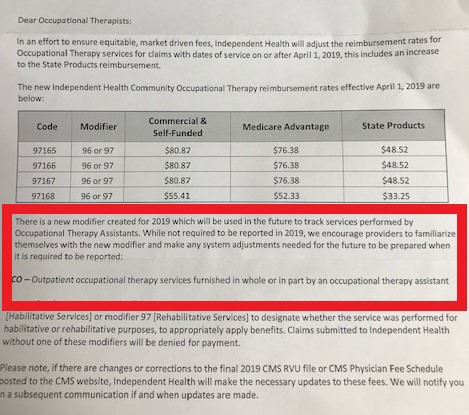 The language in the notification, "furnished in whole or in part by an occupational therapy assistant" should leave no doubt about the source of this soon-to-be requirement.

So now occupational therapy practitioners will need to start coding services provided by OTAs, and everyone can be sure that this will lead to payment differentials that are indeed spilling outside of the Medicare system.

The damage caused by this hapless advocacy position to repeal the caps is incalculable and can have a significant impact on facilities' interest in hiring OTAs.

There were a group of providers who were sending cautionary messages about messing with therapy caps for years, but it was something that was serially ignored.  The therapy cap 'problem' was primarily a problem for long term care profiteers - something that still is being ignored in the hope that everyone will continue to blindly follow the talking points that come out of professional membership associations.

1. 95% of people receiving Med B OT were not significantly impacted by the cap.

3. A more nuanced policy approach would have been to leave the caps in place and to study the factors associated with cost overruns with a small number of people, and then direct policy to address those findings.