August 10, 2013
George Edward Barton was born on March 7, 1871.  That is a rather dry fact about one of the important founders of the occupational therapy profession - so what can be done to help give it context?

Context provides dimension - and if we want to learn a little about George Barton it might be helpful to know a little about his history.  His parents lived in Boston, Massachusetts.   His father was Edward H. Barton, the Secretary and Treasurer of the South Boston Savings Bank.  His mother was Rebecca Duncan (Boynton) Barton.

It was difficult to find other information about George Barton's parents, but a rather unexpected pair of portrait photographs were contained in some of his possessions that led me through this investigation.  Here is the first picture: 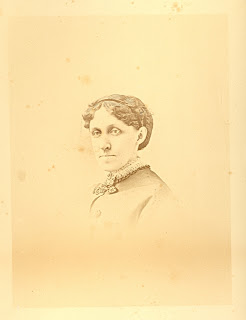 I recognized this photograph; it is an original portrait of Louisa May Alcott - but why would it be in the possession of George Barton?  Louisa May Alcott was born November 29, 1832 and she died on March 6, 1888.  That would have made George Barton only 17 years old when she died, so they certainly were not contemporaries.

This is a second (smaller) original portrait photograph that identifies the photographer as Augustus Marshall.  A quick search led me to the fact that this was taken in 1870 and perhaps she was not happy with this photographer, writing "His pictures are vile."   (Shealy, D. [ed.], 2008). 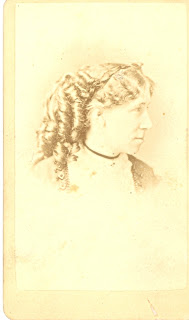 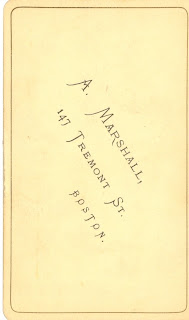 As I continued my search I learned that Louisa May Alcott was a prolific letter writer and I was able to find some letters that she had apparently written to a 'Barton' family (Shealy, D. [ed.], 2008).  I contacted Dr. Shealy about these photographs and he was extraordinarily helpful in providing some additional information:


Edward Henry Barton and his wife were neighbors of Louisa May Alcott and her sister May Alcott, when the two lived at a boarding house at No. 43 Pinckney Street in Boston in late 1869 and early 1870.  I know little of the the couple; however, they are mentioned a number of times in my edition Little Women Abroad: The Alcott Sisters' Letters from Europe, 1870-1871 (U of Georgia Press, 2008).  LMA, while in Europe, wrote to Mrs. Barton on 9 January 1871: "I shall come home as early as it is safe, & one of the first visits I make will be to my Bartons.  I hope I shall find a cradle in the house & a rosy little Edward Henry in it, ready to welcome his Aunt Weedy" (pg. 269).  From LMA's words, it appears the child is about to be born or was just born.  Since you indicate George Edward Barton was born in 1871, it appears likely he was the son of Edward Henry Barton.  That would be my first guess.  If not, he is clearly a relative.  I never located any information about the Bartons in my brief research into their lives.  However, I would suggest you use Ancestors.com or other similar websites to locate them.  You could do a search of births in Boston for 1871.

By the way, LMA's photographs, especially the Marshall one (a fairly common one), are mentioned several times in these letters in relation to the Bartons. You might find these references useful.  The index will guide you to them. (D. Shealy, personal communication, 7/31/13).


It seems that the 'rosy little Edward Henry' that Louisa May Alcott was thinking about two months before his birth was actually George Edward Barton!  I have been able to confirm dates, residences, and family members through genealogy databases and census records from that time period.

I was not able to find any other references or letters linking Louisa May Alcott to George Barton, but apparently she was important enough to him that he kept her photographs among his possessions.

Only speculation is left - but as I will show in future posts, George Barton was a Renaissance Man and had very broad intellectual interests.  It is possible that he was influenced in direct and indirect ways by Louisa May Alcott, who was obviously dear enough to him that he kept her photos.  We know that Louisa May Alcott was schooled by her father Bronson Alcott - one of the original Transcendentalists - and also spent time in the libraries of Ralph Waldo Emerson and Henry David Thoreau.

So these are the social circles of Edward Henry Barton and then his son George.  These social circles were the culture that he was immersed in and may have influenced his thinking.  It is likely that George Barton, through his family affiliation with the Alcotts, would have been very familiar with Emerson's (1837) thinking:

We will walk on our own feet; we will work with our own hands; we will speak our own minds.


This was a basic belief in American self-reliance.  It was a core philosophy of Transcendentalism.  It is just speculation, but it sounds like a foundational concept that might have been used to inform George Barton's thinking about occupational therapy.

Unknown said…
Very interesting. Thank you for all the work you have done tracing George Barton's life and all of your work on the centennial event this weekend.