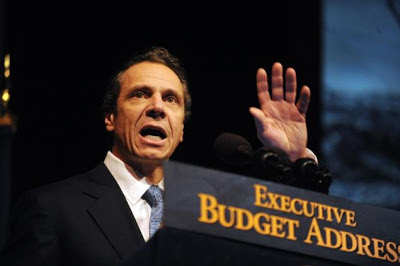 Go and remind yourself of Governor Cuomo's ideas for Early Intervention!!

READ FROM PAGES 266-274 TO REMEMBER WHAT WAS PROPOSED

Providers, please remember! If the Governor had his way you would have been negotiating rates directly with third party payors.  NOW they say "Go ahead and just accept whatever they are willing to pay."

NEXT YEAR they will probably try to put this language in again - and then you will regret JUST ACCEPTING whatever they are willing to pay.

Sorry for the CAPS, but everyone needs to understand this and write a letter to the Bureau of Early Intervention and tell them that you WILL NOT just accept what third party payors offer and that there MUST be some allowance for negotiating reasonable rates because we KNOW what the State's intention was and we KNOW that all this is still heading down the same path as soon as the Governor has another opportunity to submit his ideas in an Executive Budget next year!

Every Early Intervention provider needs to know that the County Escrow is just a short term plug and that the State's intention is to privatize the program and have you negotiate directly with insurance companies.  You must be aware that there are implications if you JUST ACCEPT what those commercial insurers pay.

You have a County Escrow safety net this year that makes up for whatever the commercial insurance will not pay - but will it be there next year when Governor Cuomo tries to insert this language into the budget and further privatize the program???

I believe that there is nothing to fear about privatization and I think that cost savings can occur in such a system - but not if providers are improperly set up for failure by tricking them into accepting anything that the insurance company will pay!!
Payment schedules and your future will depend on PRECEDENT and NEGOTIATION.  Not CAPITULATION.
health insurance OT practice