I believe that small things matter

August 10, 2012
I've been reflecting today on my belief that small things matter.

This first came to mind when our current OT student intern jokingly commented that we almost lost another puzzle piece - which is justification for disaster alert at ABC Therapeutics because I kind of have an unhealthy obsession a value for keeping puzzles complete... We recently had a celebration when we finally found the beloved monkey that was missing from a puzzle for so many months.

So anyway I am glad that we don't have that many missing puzzle pieces because even though it is a small thing I have the belief that it matters. 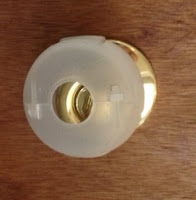 The concept was reinforced when our OT student intern was able to open the door today - she has struggled with the 'child safety cover' on the door handle for her entire fieldwork experience.  This afternoon she opened up the door on the first try and at the same time we both cheered, "HOORAY!"  Again, it is a small thing that matters.

I have also been thinking about one of my little friends who while swinging upside down made the side comment that the swing 'made his pee pee hurt.'  Well that was an odd thing for a child to say, but it was a single small comment that I thought mattered.  So, I replicated the condition when he made the statement so that he was hanging upside down from the bolster and I watched him frown and wince slightly while he struggled to maintain the supine flexion position.  I told the mom to have the MD check for an inguinal hernia and sure enough he will have that repaired in a couple weeks.

My point is that small things matter and I think we do our best jobs when we are tuned in to those details. 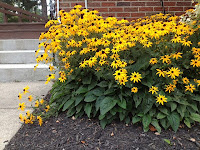 So then I was walking outside to get my mail and one part of the black-eyed susans were leaning horizontal to the rest of the group of flowers.  It was different, I thought, and perhaps warranted rearranging.  The difference was small.  If I 'fixed' it then that might be representational of what we try to accomplish here on a daily basis.  If I left it alone then even though it was growing horizontally it was still just fine the way it was and could be celebrated.  So I thought better of it and decided to let the difference remain the way it was. It was a small thing, but it made me feel ready to start the weekend.

So off I now go...
ABC Therapeutics OT practice philosophy