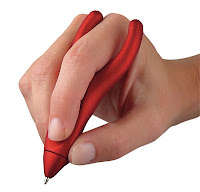 I was recently contacted by Baumgartens who sent several PenAgain products to my office and asked if I would write a review on my blog. I told the company that I only provide unvarnished reviews and I don't accept any compensation for my reviews - and since they agreed to those terms I was willing to take a look at their products.

My first impression when I saw these pens and pencils was "So, how exactly are you supposed to hold the PenAgain?"

The product doesn't come with any specific instructions so I looked at the packaging to see if that offered any hints. The picture on the package seems to show a person holding the pen in full pronation of the forearm so that there is very little to no ulnar contact with the writing surface. Use of the PenAgain in this position is supported by a few YouTube videos as well - although I don't know if the person who made these how-to videos has any relationship to the manufacturer. The idea of full pronation and the weight of the hand as the source of pressure for writing is not necessarily new. OTs might be familiar with the 'writing bird' product that accomplishes this type of function.

The problem with full pronation and hand weighting is that it does not allow a clear visual of what is actually being written - and often contributes to spacing and accuracy problems. I tried using the PenAgain in this fully pronated position with decreased ulnar contact and I thought it was rather awkward. I don't recommend using the product in this position for people who have the skill to use a more typical forearm position. I suppose that it is equivalently helpful as the 'writing bird' though for people who lack precision grasp or supination.

Then I switched to a more traditional supinated position of my forearm and relatively full ulnar contact with the writing surface, which is generally the way the forearm and wrist would be positioned during a writing task. When in this position I found that the lines and forms of the PenAgain were ergonomically comfortable but the tactile stimulation against the volar surface of the MP joint was very unfamiliar. Personally, my writing was less legible with the PenAgain - probably due to the fact that I have firmly established tactile-sensory expectations of what it is supposed to feel like to write. Altered sensory input has an obvious impact on associated motor accuracy - so there would likely be a learning curve while a person acclimated to the different sensory input of the PenAgain. Most of the kids that I tried the products with said the exact same things: first was "Wow, that's cool!" and then "Wow, that feels weird!"

This all leads to the larger question of whether or not the PenAgain is advantageous from an ergonomic perspective. There have been a few studies done that looked at pencil grasp and writing efficiency/legibility and they have not shown a significant impact of grip on efficiency. I am aware of studies that measured pen force on a writing surface and that a lot of this early work was probably fed into development of pressure sensitivity for tablet PCs and SmartPhones, but I don't know that any of it led to any grand conclusions for learning how to write. I think that the best we can say about this right now is that the jury is still out on whether or not these kinds of writing tools improve performance or skill in writing.

The PenAgain certainly promotes what most people consider to be a more 'mature' dynamic grasp pattern. The question is "Does it matter?"

These products are more expensive than standard pens and pencils but the costs are not prohibitive. Some kids might think they are cool so they will be more engaged in writing. That may have some value.

Should occupational therapists use the PenAgain? I think it could be most useful in special case circumstances where someone has a specific positioning need and this particular product could address that need. It is always nice to have product options because most OTs have run across situations that are unique where you say, "Hey, Product X might be worth giving a shot in this circumstance!" The PenAgain might be good for such situations.

I wouldn't toss out all my pens and pencils though or start suggesting that all children should learn with these products. There just isn't any evidence that different grips and grip patterns have a significant enough impact on function anyway. They might for someone. Or they might not. That means that therapists should continue to evaluate people individually and make determinations about whether or not such a product would be helpful.

My unsolicited advice to the PenAgain folks is to develop a product insert that reviews standard and adapted uses of the product, including some information on forearm rotation and wrist positioning. That would make it a little more friendly to consumers so they would know what to do when they pick up the product and try to write!!!