On the nature of Truth and getting steamrolled by a CSE 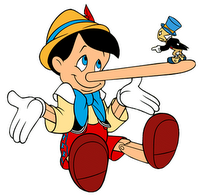 Today I had the opportunity to recall the 1980 presidential election. Perhaps this was the first election where I was politically cognizant. I recall watching debates and listening to candidates speak, but at that time I had no ability to understand how two different people could give two radically different perspectives on the same issue, both citing facts and figures during their explanations. At the time I assumed that certainly one of them had to be right, and the other had to be lying. Certainly one position was the 'Truth.'

I struggled through the entire campaign, not knowing what to think.

I don't have the same problems in trying to understand politics today. I understand now that people 'cherry pick' their facts, and that there are so many facts floating around nowadays that it is not difficult to find those that support your position. So, this picking of facts does not necessarily bring you any closer to Truth - and as soon as you realize this it is much easier to tolerate political debates.

I thought about this today while I was participating in a CSE meeting.

I believe in a logic and evidence-based rhetoric, so I tried pointing out these facts to the committee. The chairperson responded, "We never provided special education services to this child."

"I'm sorry," I replied, but in fact you did provide speech therapy, occupational therapy, and testing accomodations to this child through the fourth grade, until he completed his statewide tests."

Because the philosophical part of my brain reaches toward this concept of 'Truth' I tried to address his argument. Still, on some level he was technically correct. The CSE had historically refused to provide an IEP, but the school did provide some services to the child. By keeping the services off of an IEP there was never any accountability, never any goals, never any annual planning. "Call those services 'chicken soup,' if you prefer - the fact remains that the district identified on some level that this child had difficulties and provided services to address those difficulties."

The rest of the committee was unfortunately comprised of young teachers who didn't understand my perspectives on the transhistorical and intersubjective nature of 'Truth.' So there we were, two existent witnesses to the 'Truth.' The CSE chair continued, "Well we have a consensus opinion on this committee that this child has not ever received special education services and that he does not qualify for them at this time either."

"I didn't hear any consensus," I replied. "I just heard you talking." Some small part of me hoped that someone around the table studied Heidegger and the phenomenology of Truth, but I think they all just wanted to keep their jobs. One by one, they individually replied, "I agree with Mr. CSE Chair."

So Truth took a hit today. And a child continues to be neglected by the school. Parents beware: if you are looking for Truth, you won't always find it in your CSE meetings.
school-based practice