Maple seeds and putting your face into the wind 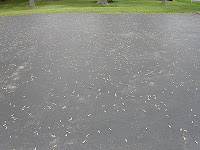 The clock was ticking past the 10am appointment time, adding much to the level of stress that Michael's mom was feeling. Michael had more important plans than therapy and did not want to come inside the building for his appointment. Over the weekend several thousand maple seeds fell from the trees, covering the parking lot and creating a rather large distraction for any child who had to make their way from their car to our front door.

I watched Michael as he grabbed handfuls of the seeds, stood on top of a stone in the yard (as if this somehow added significantly to his actual elevation!), and launched the helicopters up so he could see them twirl whimsically to the ground.

It was such a simple childhood occupation but it was so much fun, and it caused me to pause this morning because I was a little surprised at how simple the play was and how apparently meaningful it was. Playing with the helicopters evoked happy feelings for Michael - and for me - but not for his poor mom, who for a moment thought that the appointment time was more important than the play! What person who has ever been exposed to maple seeds doesn't have a happy memory of playing with the helicopters?

Among other things, childhood play creates competency precursors for adult functioning. Even though I believe this to be true, I find myself a little taken aback sometimes at the power of childhood play lessons. I told mom it was ok and to let Michael play for a few minutes. He was creating some memories, and I thought that it was important to let the moment happen.

Childhood play does the same thing, actually. I watched Michael launch the seeds, and then I watched him twirl himself in imitation of the flight. Then I thought that he was still so young, and that there were so many places that he would go to in his life. I watched his mom smile as she watched him play.

I guess that today's lesson is that there is something to be said for putting your face into the wind and twirling.

We so often put children in the "tyranny of the clock".

When you put yourself into Michael's ... play space, didn't you also open up a space for a better connection over time?
8:57 PM