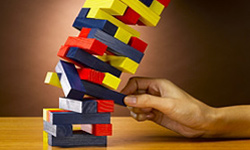 An analysis of the recent motion to update policy E.6 Entry Level Education is offered for consideration.

Please refer to the following for background information:


ROADMAP FOR UNDERSTANDING THE ISSUE: 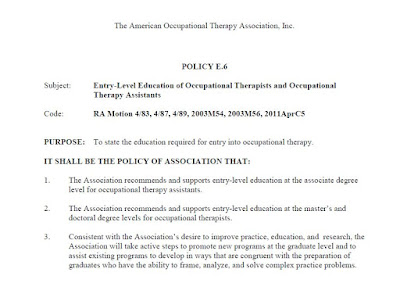 The motion that was submitted to update the policy used specific language that mirrored the current policy and that was last reviewed in April 2011.  The same language was recommended so as to eliminate unnecessary wordsmithing.  In sum, if the language was good enough for the current policy then it would probably be close to good enough for the updated policy. Please note that this language has been present as AOTA policy for MANY YEARS and no one has ever before considered that this policy caused any confusion.

The motion to update the policy was submitted as follows:


IT SHALL BE THE POLICY OF THE ASSOCIATION THAT:

1. The Association recommends and supports entry-level education at the associate and bachelor degree level for occupational therapy assistants.

2. The Association recommends and supports entry level education at the master’s and doctoral degree levels for occupational therapists.

3. Consistent with the Association’s desire to improve practice, education, and research, the Association will take active steps to promote new programs and to assist existing programs to develop in ways that are congruent with the preparation of graduates who have the ability to frame, analyze, and solve complex practice problems.  Any active steps taken by the Association must be within the parameters that are outlined in this Policy, specifically, with support of dual levels of entry for the OTA (associate and bachelor level) and dual levels of entry for the OT (master's and doctoral level).

The motion that the RA approved this weekend is quite different:

IT SHALL BE THE POLICY OF THE ASSOCIATION THAT:

2. The Association require entry level education at the master's or doctoral level for occupational therapists.

Question one: WHY was there a recommendation to insert the word 'requires?'

Changing the words 'recommends and supports' to 'requires' changes the plain meaning of the motion.  That also changes the implication of the conjunctive 'and.'  Stating that the association 'requires' entry level education at Level A AND Level B could have been confusing.  That may be why they changed to 'requires' entry level education at Level A OR Level B.  Or was someone with knowledge of the AOTA and ACOTE relationship attempting to use this motion as a prop for the AOTA's position of authority over this matter?

Still, there is an unintended consequence hidden within the language.  We do not know the relationship of AOTA and ACOTE at this time, and presumably neither did the members of the RA.  It is clear that AOTA asserts authority over the accreditation function, even though that is problematic, and it is also clear that ACOTE has previously deferred to the recommendations of AOTA, even if they have had technical authority over many aspects of accreditation.

IF ACOTE became an independent entity tomorrow, they could interpret the new Policy E.6 as saying that AOTA requires entry level education at Level A OR Level B.  This is actually a wishy-washy statement.  We know that ACOTE previously wanted the doctorate, so they could easily say, "Since AOTA does not explicitly state that they recommend and support both - but instead state they will require A OR B, then we will set the standard at the doctoral level!"

This is the peril in changing words and in changing conjunctions without carefully measuring the full implication.

Question two: Why was all of the language under Point Three removed?

We were told in the business meeting that all of the language previously listed under Point 3 was removed, as was all of the parallel language that was suggested in the original motion as an update.  We were told that it was removed because it was 'aspirational.'  It is unclear what is meant by 'aspirational.'.  That kind of language has been AOTA policy for the last eight years at least - so why was it necessary to remove that language now?

It is especially problematic to remove that language now because it was the only aspect of the motion that might have clarified the actual intent of dual entry that was absolutely muddied with the other wording changes.


WHERE WE NOW STAND:

Right now, Amy Lamb (President of AOTA) indicates that the intent of the motion is to support dual entry.  That was also the intent of the motion's originator, by report, but that is not what the motion can now possibly mean.  I am uncertain if everyone understands that the motion as written can be interpreted in other ways.  It is also very unclear why this level of wordsmithing was done at the RA level.  These changes have carried the motion so far afield of its very clear original wording.  In particular, removing the clarifying language under Point 3 is disastrous.

By report, AOTA and ACOTE will issue a joint statement in the near future.

There were a multitude of other problems with this process - some previously blogged about.  Now we have additional problems with whether or not the proceedings were confidential as some participants believed they were supposed to be.  We also have problems with why a motion that was submitted for the Fall meeting would be wordsmithed like this at the last moment and with potentially perilous results.  This could have all been avoided with increased transparency, more careful tracking of changes, obtaining feedback on the tracked changes, and having those with legislative crafting skill sets have their eyes on the process to assist with interpretation and meaning changes with various wording options.

Immediately after this motion passed I was contacted by members who were confused about whether they passed something that may have multiple interpretations.  People were talking about the different interpretations that could be obtained with the wording changes as soon as it was passed.  Certainly some people knew that this was coming - because the issue spread around like wildfire as soon as the RA voted.  It seems to me that some people clearly have the skill set to understand the implications of wording/conjunction changes and deleting the clarifying Point Three.  Others clearly do not.

Now the membership has to hope for more information on the AOTA/ACOTE relationship, and perhaps re-craft this language to more accurately reflect the intent of support for dual entry.

Problems with breaches of confidentiality expectations, transparency, and process all need to be fully vetted and addressed.  That does not mean that it should be done out of sight of the membership.  As this in particular is an issue with broad public impact (educational accreditation), it must also be done in full sight of the public.

The AOTA and its members should be more mindful of differential skill sets of participants, because entire meaning can be changed with something as simple as the change of a conjunction or as the change in the placement of a comma or in the deletion of qualifying or clarifying statements.  That is why the process needs to be more open and transparent - to everyone.  These are unforced errors and can be avoided by an open and participatory process.