I was reminded several times today that people are different. That is really an obvious statement but it is so simplistic that I think it is important to remind ourselves of this fact.

Sometimes the simplest things slip by us the easiest.

Personal context is important to consider – otherwise the world begins to look very grim and automated. Several non-occupational therapy contributions to the scientific literature had a significant influence on occupational therapy’s move away from reductionistic models. For example, Boulding (1968) and von Berrtalannfy (1968) wrote comprehensively on the subject of general systems theory, which refocused science’s focus away from increasingly narrower ranges of perspective. Boulding also wrote about the power of subjective knowledge and its influence on all of human behavior (1966). Although I don’t believe that any of these authors are routinely cited in the occupational therapy literature, their contributions to changes in scientific thinking are related to occupational therapy’s move away from biomedical considerations and toward individually contextual theories.

I already explored some of these ideas here, in case you are a late comer to the conversation.

So who cares? Well I was staring out my window today, noticing the fact that the grass was getting greener. Then I looked at my neighbor’s lawn and decided that his was much greener than mine. In fact, his lawn is perpetually preened to perfection – kind of like this:

My lawn, on the other hand, is loaded with dandelions. I kind of like them, and since we have a large country plot of land I can get away with dandelions because they are in context, so to speak. Dandelions are ok in large meadowy fields. They are no so ok on small city patches of grass. My lawn looks more like this:

The property line is clearly demarcated – my line of dandelions goes directly up to the edge of his ‘putting green’ lawn. This is a fundamental difference between my neighbor and I. We respect each other’s preferences, and in fact we laugh at our differences.

Now if health care is ever going to be more humanistic, it needs to somehow know that I am a dandelion grower, and my neighbor is not. Otherwise we will all just be stacking cones in therapy, or something worse.

Also, the system needs to know that my brother is apparently a garden globe gazer. I personally never understood what the fascination was with garden globes and I would be dead before one made its way onto my landscaping. I was just shocked to see his garden globe in some family photos that he just sent. I don’t know why he has one, and I can barely wait to see him this weekend so I can ask. I cropped my dear sister and niece out of the photo, although I was tempted to leave them in. Here is his globe: 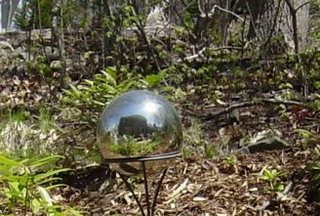 So the world is large, and different people inhabit it. Some are dandelion growers, some are lawn fanatics, and some are garden globe gazers. Personal context gives us a model and a reason to learn about those differences, and maybe treat people a little more individually.