The Slow March of Change 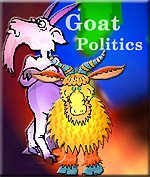 I provided expert testimony last week in a state Supreme Court case. A municipality is suing a family because they keep three goats and a llama on their property for purposes of 'animal-assisted therapy' for their child who has autism. The family purchased the property (previously used as a horse farm) thinking that they could keep these animals on the premises. It turns out that the land was re-zoned and the previous owner's animals were 'grandfathered' but that the land use restriction came into effect when the property was sold (unbeknownst to the family who has the autistic child). They had these animals for over ten years and the child does derive some benefit from interacting with them.

My testimony centered around the child's condition and the use of animals in a therapeutic context. The child interacts appropriately with the animals, enjoys 'pushing' fights with the goats, and it is one of the few purposeful activities that sustains his attention. The community is a farming community, although the town is growing and that apparently led to the re-zoning. Although the new zoning law restricts farm animals, they have over two acres of land and the neighboring property is another horse farm.

The policy issue at stake is the Fair Housing Act, which is a federal statute designed to prevent discrimination in housing for people who have disabilities. It is most commonly referenced with regard to group homes but it applies broadly. The Act is not intended to trump local housing law, but is meant as broad policy guidance for local zoning laws. For more information on the act please see http://www.hud.gov/offices/fheo/FHLaws/yourrights.cfm

In keeping with my earlier rant on disability rights, is it a fact that the policy of non discrimination against people who have disabilities has failed reflected in the presence of an HUD complaint process? Do policies fail when we need to have another branch of government (judicial) interpret the laws that were written to support the original policy?

Discrimination under the FHA includes "a refusal to make reasonable accommodations in rules, policies, practices, or services, when such accommodations may be necessary to afford [a person with a disability] an equal opportunity to use and enjoy a dwelling." 42 U.S.C. § 3604(f)(3)(B).

So if our civil right policies work, why did I need to testify in court? Policy making and 'pace of change' is described well in the Birkland text (pp 46-49) 'An Introduction to the Policy Process.' In this context I don't know if it is fair to say that the civil rights policies 'failed;' rather they just evolve at a VERY SLOW PACE!

I am certain that the municipality views this all very differently. It will be interesting to see what happens with this case.
autism Disability rights