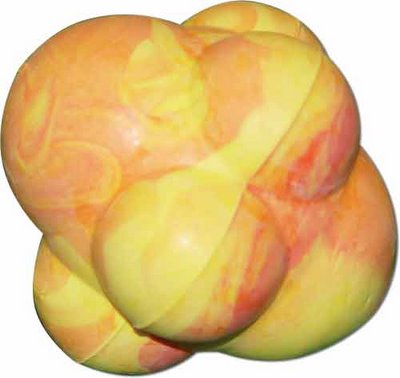 I watched the young boy approach the table at the farmer's market. He was only 8 I figured. Maybe 9. His hands reached immediately for a ball on the table. It was oddly shaped so that as it 'rolled' it would go in unpredictable directions.

The young boy looked at the 75 cent price tag and dug deep into his pocket. He smiled, excitedly: he had enough money. Still, he seemed to pause. I imagined that he was trying to decide. Is this what he would spend his money on?

"My son and I spent hours and hours playing with that ball," announced an adult voice from across the table. "We would play with that ball for hours. It was the most fun we ever had."

I don't know how to convey the true intent of this man's statements. I am sure that I heard something very different than the little boy. I heard a professional farmer's market pitch-man, trying to eke out another sale. The little boy's eyes lit up. This statement made his decision easy. He quickly handed over the money.

Running to the next table I saw him hold the ball up to his father. "Look what I got! And it was only 75 cents! That man said that he and his son had hours of fun playing with it."

The father looked down at the overpriced bauble and yelled back to the salesperson out loud, "If the damn thing was so much fun I wonder why he would ever want to sell it."

The father turned away, consumed in pursuing his own interests. The salesperson at the table shrugged the encounter off.

The little boy stood in the middle of the two, holding his ball.
parenting

I've been reading your blog for a while now - this entry struck me in particular. Thanks.