On string theory and muddy paws 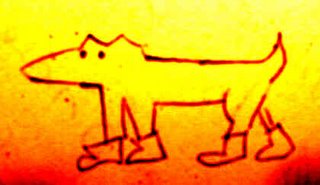 I mentioned a couple months ago that I would be an astrophysicist if I wasn't currently practicing as an OT. Actually, I lack the mathematical ability to do this kind of work seriously. Despite this, in my ongoing attempts to enlighten myself on the nature of the universe I went and listened to a Brian Greene lecture this evening.

This actually does have something to do with OT. This has to do with our choice of occupations and the impact that it has on our world-view.

I have a General Systems Theory Knowledge Map hanging on the wall of my office. I keep it there to remind me to think expansively, but the bottom end of the Knowledge Map is a little outdated - I think it lists atoms or perhaps just quarks. Tonight the lecture was about strings, of course. It was interesting, but perhaps not as technical as I was hoping to hear.

Actually the most important part of the evening to me was listening to the questions that people asked him. There were some very hostile questions, although they were asked politely. One had to do with the existence of God. Another had to do with the theoretical presence of a 'Love' force (in addition to electromagnetics).

Some people don't want to hear that life as we know it can be explained by wave structure. Perhaps it really can't - and I think that is the point. The audience's questions can't be broken down into psychophysiological correlates of string resonance. This is the disconnect that I am not sure the Academy understands. Physics is a closed system science, dependent on a clockworks-type of model in order for it to work. People's lives are too interdependent on other systems to be understood at the clockwork level.

General and dynamic systems theory states that the whole can't be explained simply as a sum of its parts. The behavior of electrons passing through my computer is governed by quantum laws, but I am typing this to you and you understand it because of linguistics and communication theory. It is a little arrogant to think otherwise. Smart people should know enough to reject models that embrace reductionistic models of upward causation.

We are still struggling with everyday problems in our society and people just don't draw connections between science and everyday living. Here is an illustation: on my way out of the lecture I was talking to my son when I got a cell phone call from home. My son and I were discussing the nature of the universe and the phone call was from my family who is tired of this long and wet Fall and the way that the dog is getting mud all over the kitchen. No one wants to clean up after the dog constantly, and it has been a burden recently. So, they want to put boots on the dog. It's a funny thought, actually - and the timing of the discussion made it even more funny.

This is the disconnect between string theory and muddy paws. People just have too many other problems to deal with, and it is frightening to people when they hear scientists speak so boldly about Unifying Theories of Everything.

We are just not ready yet, and perhaps our Science has outpaced our ability to cope. I predict that we may be ready for string theory when Jerry Springer is no longer an option on the television. Life is complicated enough with people trying to live it in three dimenions - we just aren't ready for any more.
philosophy