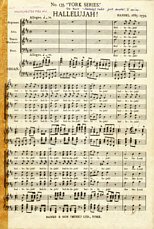 I went to my daughter's Christmas concert this evening, and this event always evokes some thinking. I live in a smallish place, and there are some particular traditions associated with the school's Christmas concert. Each year one of the final songs is the Hallelujah Chorus and members of the audience are invited to go on stage and sing with the students. Now my son just graduated so of course it is much too un-cool for him to step onto that stage yet, but I expect that at some point in time he will fondly recall the regional tradition and he may even choose to go sing on that stage again. It is the stage that he was on when Emile de Becque kissed Nellie Forbush, the stage where someone handed him his diploma, and of course the stage where he sang the Hallelujah Chorus . It will be a return, because it is a part of him. Perhaps it is a part of his identity, and the occupations that he engaged in on that stage were all quite defining for him.

I hope I am not presuming too much. If he reads this he is going to kill me. It is 3:53am and he knows I lose inhibitions when I write at this hour so he will probably forgive me.

Well anyway... here is the connection to OT.

Soren Kierkegaard (1938) wrote that “Life must be understood backwards.” Reminiscence is a developmental, generative, and restorative process that is defined as the recall of familiar past events (Woodward, 1997). Havighurst identified that life review is an important developmental task of old age (1972), and first identified correlation between high frequency reminiscence and psychosocial adjustment to aging (Havighurst & Glasser, 1972). Reminiscence is a technique or intervention that has since been used in order to help people ameliorate depression, foster positive self esteem, and promote life satisfaction. The use of reminiscence is a manipulation of context: a recalling and retelling of different times, different places, and different memories that are far removed from the immediate contextual references.

I am imagining that stepping up onto that stage provides a physical and real life prompt for reminiscence. It is a ride back into time for people. It connects their past with their present. And next year they will get to do it again, and perhaps they will get to sing on stage with their children, or maybe even their grandchildren.

There are broader community and social and cultural connections here also, all serving to reinforce the concept of occupational identity on levels larger than the individual.

I am just a crazy outsider, a detached social scientist and occupational therapist making observations here because I never sang this song on stage in this community. But Caleigh, my 13 year old daughter, mentioned tonight - "I can't believe that next year I will get to sing the Hallelujah Chorus at the end of the concert." It has meaning for her and it hasn't even happened yet. That is intriguing to me.