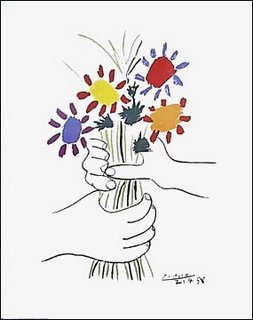 I apologize in advance for the rambling nature of this entry, but stream of consciousness is part of the process, and I hope helps to lead to an understanding of the issue.

As I see so many children who have attending and regulatory-type difficulties I spend a good deal of my time investigating strategies that will help them to improve their capabilities. In order to be successful those strategies have to be reinforced, and so logically this means that the rest of the world that interacts with kids has to 'believe' in the stragegy if they are going to help facilitate its use. This is a primary problem with many sensory-based interventions that lack the face validity needed that would support general acceptance. Throw in the issue of a total lack of evidence and mix in the intraprofessional dogma that clinicians are fed about sensory techniques and you essentially have the current evidence-less state of clinical pediatric practice today. That is rather grim now, isn't it?

Well anyway I am taking a long time to get to the point.

This leads me to mentioning metacognition - or very simply stated - "thinking about thinking." There is a lot of face validity to the concept of teaching a child to cognitively self-monitor. I haven't specifically done much literature review on the technique to see if there is evidence already published so that is being put on the list of things to do. Anyway, people 'get' self-monitoring. It is an educational and behavioral method and I never have difficulty getting the world to buy in to the concept.

I mention metacognition because in my Fulleresque brain it leads directly to metablogging, which is something that I have really wanted to talk about lately as it relates to Interactivity and this whole experiment in online writing. OK, so now we need to take a dive into interpretive literary methods so I can connect all these dots.

Sartre studied the concept of emergent discourse and identified that one of the chief motives of expression through writing was “the need of feeling that we are essential in relationship to the world” (Sartre, 1949, p. 39). According to Sartre, the writer creates, waiting for the reader who then in turn objectifies what is written. Both are dependent on the other. Sartre states that “all literary work is an appeal… to the reader’s freedom to collaborate in the production of his work” (p. 46). This is a critical concept, because as it explains the inter-relationship that existed in the transformation of social thought in Renaissance writing, it also will explain the nature of interactivity in modern and post-modern writing.

In his book 1984, Orwell (1949) also explores the nature of discourse through writing. Winston Smith, the protagonist, wonders who he is writing for – and wondered how he could possibly communicate with the future. In fact, Smith was writing for himself, and in doing so engaged himself fully in a real knowledge and affirmation of the world that he was living in. Orwell’s statement “To mark the paper was the decisive act” (p. 10) is an affirmation of Smith’s interactivity with the world – a world that he came to hate and rebel against.

In addition to engaging the author with the larger world, writing also specifically engages the author with the reader. Writing is not a solitary activity. Langston Hughes captured the nature of this interplay beautifully in his poem Theme for English B. Hughes writes:

It is in this interplay between writer and reader that the writer becomes ‘essential’ to the world. This is the nature of modern literature that brought the writer to the world of the reader in an inter-active sense.

OK, so what does this have to do with anything? I am trying to walk you (dear reader) to the question of 'what I am supposed to do with the comments that people leave on this blog?' Some comments are little notes that don't invite or require response but others comments that are left are so incredible. If I don't inter-act with what people are writing back to me it is like I am four years old and having conversations with my pretend friends, neglecting to talk about the proverbial elephants that are in the room.

What an interesting way to explain the possible opportunities lost in a world of post-modern Interactivity. I don't know that I could have described than any better if I stopped to think about it. Stream of consciousness at 3am has its benefits, I suppose.

Anyway, yesterday I received the most incredible response to one of my blog entries and you can read the original entry here and then follow to the bottom to see the comment that was left. It made my day in so many ways I can't even begin to express it.

There was another comment left the other day by a parent who was grappling with the difficulties that their child was having in school. This parent captured in a few sentences what I stumbled through an entire entry trying to express. Read the comment here. Don't you just want to reach out and DO SOMETHING about this? This small comment explains my raison d'être. I hope that the person who wrote that comment calls me so we can talk about the issue.

So now I feel better. Metablogging. I have to find a way to understand how this interactivity works...

julie said…
Chris,
Thanks for your interest in my daughter's story. I'd love to talk about if she might have a regulatory problem that I could articulate to her teacher. I would advocate for accomodations if I had an idea what might be helpful. She doesn't have overt sensory problems as defined by the sensory profile. I'm a bit stumped, but not close to quitting the quest for answers to help my best girl.
Julie
jphipps7@woh.rr.com
4:19 PM