Analyzing the AOTA/ACOTE Data Dump, Part Two: Some Stakeholders Are More Equal Than Others 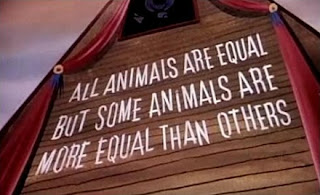 Please refer to this earlier post for background reading.

According to the 'ACOTE Entry-Level Task Force Report to ACOTE in December, 2014 (p. 381-393), some stakeholders appear to be 'more equal' than others.

The notion of being 'more equal' is a reference to Animal Farm and the pigs who ran the farm.  They famously stated that "All animals are equal, but some animals are more equal than others."  In simple terms, the ruling elites of Animal Farm made claims that everyone is equal, but then we discovered that they provided benefits and power and privileges only to their elite comrades.

What privileges are handed out by AOTA/ACOTE?  The answer can be found starting on page 381.

AOTA/ACOTE overtly places stakeholders onto different 'lists.' These are not categories or labels of my design - these are the actual lists of AOTA/ACOTE:

The 'A' List:
Educational Program Directors
Academic Fieldwork Coordinators
OT/OTA Faculty
OT/OTA Clinicians and recent grads
Clinical Fieldwork Educators
OT/OTA Students (named as 'A' but then listed as 'B' later in the document)

The 'B' List:
Employers
Educational Administrators
Other accrediting bodies

According to this document, some stakeholders would have to be addressed 'at a later date' but there is no indication that this ever happened.  Those sections of the chart are simply not filled in (p. 392-393).  The methods for gathering input from their academic comrades is certainly included on this form though.

There are some 'A,' 'B,' and 'C' level groups where there is no indication that their opinions as stakeholders were ever considered with regard to the doctoral mandate.

It is not surprising that AOTA/ACOTE gives preference primarily to an 'A' List group that is primarily composed of educators.  It is also not surprising that they give least consideration to consumers, insurance carriers, and similar stakeholders that have to sit on the receiving end of their policies and deal with the implications in the real world.  They had no apparent plan for even talking to them based on the fact that they are listed on 'B' and 'C' lists that are not even populated with data.

During an August 2015 meeting of ACOTE members and AOTA staffers in Portland Oregon speakers were invited to present their opinions about the entry level doctorate.  Those people were:

Clinicians and students are supposedly on the 'A list' but they were not invited to come and present opinions to AOTA/ACOTE.  Some stakeholders are more equal than others.

Values can be judged by actions taken.  AOTA/ACOTE overtly prioritizes academia and they also overtly ignore or avoid the opinions of other stakeholders.  They are so bold that they even label and rank them into different lists and they only invite certain voices to their table.

Populating ad hoc groups with academic comrades is not new for AOTA/ACOTE.

In recent weeks AOTA Board members and staffers have made comments on social media and in other venues about the separation between AOTA and ACOTE.  When names of participants of meetings are redacted and when finances appear to be entangled and when ACOTE functions are held within the context of AOTA meetings and when AOTA staffers answer emails for ACOTE (on and on) there are going to be reasonable questions.  Simply re-stating that there is a separation does not satisfy the questions.

AOTA has a right to cater to whoever they want to cater to - they are a private club and members can join or not depending on their support for who AOTA chooses to cater to.

ACOTE does not have the right to cater primarily to academia.  I say that with all respect to my colleagues in academia - and in acknowledging my own role within that setting.  ACOTE's stakeholders should be more broad and ACOTE should be much more purposeful about their practices for listening to an inclusive list of stakeholders.  Based on the information released, that has not always happened.

Accordingly, it places the legitimacy of ACOTE in question - they appear to  be a quasi-regulatory group that is hopelessly entangled in a web of conflicted interest with its parent membership club that has a long  history of being influenced by and catering primarily to academics.

To the prosperity of the occupational therapy academy!
OT Education

Unknown said…
I completely agree about the dissociation between academia, AOTA and practitioners. Sometimes I feel like AOTA/ACOTE is a squad of cheerleaders who have the crowd (academics and students) all whipped up to cheer on the profession, while the actual team on the field (practitioners)is undergoing a zombie apocalypse. Those in the stands can see the decimation on the field, but they're just so caught up in the cheering that they keep on doing it, even as the team is being eaten alive. The cheerleaders keep their backs to the field, and are oblivious. Perhaps I've just watched too many movies, but I keep encountering former students and other colleagues who feel bound up and ground up by demands for "productivity" and protocols. Clearly our efforts to keep teaching the beautiful full-spectrum OT that is our heritage and in the OTPF are at odds with the realities of many actual practice sites. I really think we need to place our efforts into figuring out where/how we can actually provide real OT to people than to raise a bunch of OTDs who we hope will prove we're essential under the current adverse working conditions.
6:32 PM