Why Dads are so lucky. 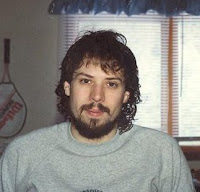 I pulled this out of a fifteen year old journal tonight and decided to post it.  My daughter will be 21 years old next week so I thought I would remind her of a story.

Casey (my youngest daughter) will write novels or be an artist someday - I am sure.  She writes constantly, and she is only in kindergarten.  I find scraps of paper all over the house, and she will take books from my library and sit down to spend hours copying the words.  She is like a little monk scribe, preserving the world's knowledge before the Dark Ages.

It is so funny to see what she copies.  The other day I found a couple pages about an annual spaghetti dinner, complete with driving directions.  I also found a page about renal physiology from a medical text.  Of course she has no idea what she is writing, but it is just the act of copying that she seems to love so much.

She surprises me sometimes, and is able to form sentences and draw pictures.  I found her "diary" the other day - but I have to explain the other point first...

I got a haircut a couple weeks back and it was a radical departure for me: most of my long hair was hacked off, and it was scary for Casey to see.  "Where are all your curls, Daddy?" she wanted to know.  And she was so concerned, "If your hair is gone, what is going to keep your brains in??"  She wouldn't leave me that night, and fell asleep right next to my head - guarding my precious brains to make sure nothing bad would happen.   I love the way young children think and have such a shaky concept of how human bodies work.  But I failed to understand what she was really telling me.

So I found a notebook with writing and pictures in it, and she told me it was her diary.  She doesn't copy in it, she told me.  It is only for what she thinks up in her own head.  I was intrigued; after all, she is only 6 years old.

My heart broke and healed and was warmed all at the same time when I opened to her most recent page.  It has a picture of a person, who she tells me is her.  The person has "thought clouds" as she calls them above their head - there are two of them (these are the little bubbles leading up to a cloud, indicating that the person is thinking.  She must have learned to do this from one of her sisters).

Along the side it says, "I love you."

So I asked her what it was a picture of and she said, "I was just thinking and I felt kind of sad, but I felt kind of happy too.  And then I decided that I only wanted to feel happy, so I changed it to a happy face."

Also written on the page are 6 simple words: "My Dad is get a haircut."  In the most beautiful 6 year old printing I think I have ever seen.

Poor Casey was so bothered by my changed appearance but loves me so much and never wanted to show her sadness over the change.  And it was not just that she didn't want to show her sadness - it was more than that.  She wanted to show her love.  Despite something that was hard for her, and obviously made her sad - she found a way to show love.  That is the kind of love that persists - even when you lose your hair and your brains are at risk.

That is why I think Dads are so lucky.
parenting Too much information