From elite social clubs to personal atonement: The history of the formation of Consolation House. 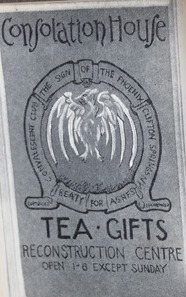 Private and elite clubs were vehicles of socialization and business transaction during the Gilded Age.  Clubs were often restricted in membership and members were highly scrutinized before being offered the opportunity to join.

The Tavern Club in Boston is one example of an elite social club.  It was established in 1884 and was a gathering place where the members were focused on fine dining, lectures, and the arts.  Notable members included Charles Eliot Norton, William Dean Howells, and Henry Cabot Lodge.  Herndon (1892) described the club as "an organization of good fellows, mostly artists, musicians, and lawyers, who breakfast and dine together with more or less regularity in their snug and artistically fashioned club-house on Boylston Place, just off the busy thoroughfare of Boylston Street by the Commons."  The entrance dues in 1892 was a $50.00 fee.  The approximate 'economic status' of that amount in 2015 terms is $11,100.00, which provides some current-day comparison to understand the social prominence associated with the Tavern Club.

Hornblower (2000) provides additional perspective on the nature and function of Boston social clubs, including the Tavern Club.  He reports in tongue in cheek fashion

"The Tavern (1884) is said to be so exclusive that the man who proposed forming the club, a teacher of Italian descent, was denied admission. Sort of... The club was founded to promote “literature, drama and the arts.” Today it more or less pursues that mission...In the late ’80s, the Tavern was perhaps the most vocal opponent to sexual integration. One production, included a song entitled, “We love the ladies.” Its final refrain: “But we’d rather have the place in embers/ Than see them as regular members.”'


In 1988 the Supreme Court ruled in NEW YORK STATE CLUB ASSOCIATION, INC., v. CITY OF NEW YORK et al. that such private clubs were forbidden to discriminate based on race, creed, sex, and other grounds.  Opinions about the social value of clubs has changed and fewer people place value and importance on membership.  This is very different than how those clubs were viewed during the Gilded Age.

George Edward Barton served on the Elections Committee of this exclusive club from 1901-1903.

This fact becomes relevant because it provides useful background information when attempting to understand Barton's methodologies for creating the National Society for the Promotion of Occupational Therapy (NSPOT), which later was renamed the American Occupational Therapy Association.

Consolation House was opened on March 7, 1914 and marked the beginning of Barton's activities that ultimately led to the incorporation of the CHCC on April 1, 1922.  The purpose of the Club was to provide a location where people who were disabled could rehabilitate themselves and develop skills for economic self-sufficiency.  Every article or product made by a disabled person was to be stamped with the image of a phoenix which was the official emblem of Consolation House.  The motto "Beauty for Ashes" was also supposed to be stamped on the product so that anyone making a purchase would know that "this article was made by a sick man who is doing his very best to support himself."

Barton's earlier experience among the most elite members of society served as the basis for his creation of a new kind of club.  The use of a Club as a means of social expression was normative in his perspective.  However, due to his illness, Barton believed that he had lost everything.  He stated to Elwood Worcester (1932),


"What is the use of talking to me?  My life is utterly ruined, my health, my power of movement, my beautiful profession, my wife and child, my home, my capacity for earning money are taken from me.  All that is left for me is to sit in this chair, a beggar, a pauper and to suffer like hell..."


Barton's choice of the Phoenix represented his belief that something new could be born out of such loss.   His choice of the naming of Consolation House and the motto "Beauty for ashes" also reflects his spiritual conversion at the assistance of Worcester.

Worcester was not a social elite - he was a preacher in Boston - but many of those club members came to his church.  He provided Barton with the relevant scripture that would send him on his way to recovery and also lead him to his new occupational therapy mission.


To appoint unto them that mourn in Zion, to give unto them beauty for ashes, the oil of joy for mourning, the garment of praise for the spirit of heaviness; that they might be called trees of righteousness, the planting of the LORD, that he might be glorified.


The methodology for mourning in biblical times was to sit among ashes and to rend your clothing.  The message in this passage from Isaiah is that people can be comforted.  And consoled.   And happy again.  Barton existentially depended on such an atonement, reformation, and rebirth.  Barton's actions need to be considered within the context of his personal life story.  When some historians lacked that information, his behaviors were labeled as 'zealous' and 'sometimes irrational' and he was described as a 'difficult person' who lacked 'interpersonal skills' (Quiroga, 1995).

These characterizations of Barton are incorrect.  He was just a man who held a particular station in life and perceived that he had lost everything.  He used the tools he knew best to create a solution for himself, and that solution ended up contributing to the creation of the occupational therapy profession.

As reported in the Clifton Springs Press, one of the founding directors of the Consolation House Convalescent Club was Elwood Worcester, the minister who brought the Emmanuel Method to Barton as he convalesced in Clifton Springs, NY.

When you consider the historical context and motivations of George Barton, it becomes quite evident that Consolation House was aptly named.  He was a man who believed that he had a mission, and fulfilling that mission was an expression of hope for his own recovery as well as the recovery of other people similarly situated.

Herndon, R. (1892). Boston of today: A glance at its history and characteristics. Boston: Post Publishing Company.  Retrieved from http://archive.org/stream/bostonoftodaygla00hern#page/n5/mode/1up

Sarah Lyon said…
This picture is amazing!! Where did you find it?
1:49 PM

Christopher J. Alterio said…
Hi Sarah,
That (imperfect) picture is from the archived materials at the Foster Cottage Museum in Clifton Springs, NY. You might note that the word 'beauty' is misspelled! Little is known about the actual artist - I believe that the Clifton Springs Historical Society commissioned someone to generate a 'cleaned up' replica of the image for marketing purposes. I am pretty certain that the image will be going on a mug they are selling for the Centennial Celebration - and I think I posted a picture of that mug a while back! Sorry for the fuzziness but I don't have any of those notes in front of me. I will try to hammer down some details on that picture and update things here...
2:10 PM