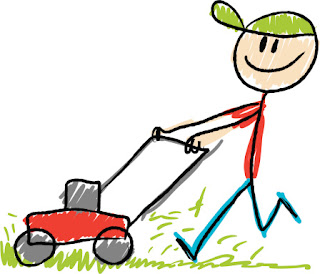 The people who come to me asking for help with a problem are interested in whether or not I will be able to summon the requisite knowledge to address their concern (Competency Test A).  They are also interested in whether or not I am a 'nice guy who cares' while engaging in that process (Competency Test B).  As an example, this morning a mom wanted my opinion on how to solve a problem with the positioning of her child's head and neck, because of being tilted over to one side.  I have seen hundreds of cases of torticollis, but none of them are "routine" to me.  Every one of them is treated with as much seriousness and concern and diligence that I can muster.

If I treated them as 'routine' then I probably wouldn't take the time to meet the parent's Competency Test B (the 'nice guy who cares' test).  Fortunately I was able to summon the requisite knowledge and give the parent some treatment opinions.  As I was doing so I interacted with her children and made such an impression on the youngest that he wanted to give me a big hug when he left.  I passed all the tests!

The reason why I pass the tests is not only because of my knowledge about torticollis.  The problem is not only that his head is tilted to the side.  The problem is that it MIGHT stop him from running a fly route, craning his neck in every direction to find the ball, and then catching the game winning Hail Mary pass when he makes it to the NFL.  Nothing is routine when you are asked to help a parent with their concerns about their child.

Don't tell that to the insurance company though.  They are also interested in what I am doing.  Based on a proposed CPT coding system they want to know if what I am doing is a low complexity or a high complexity task.  I understand their interest because they are trying to find ways to develop coding systems that will control costs.

I am not really interested in their definitions of Value (Cost-Cutting).  On a moral level I don't know how to answer the question about complexity.

If it was a simple or low complexity problem then why would the parent be concerned?  I can state factually that parents don't seek out occupational therapy services routinely.  They tend to take care of a lot of things on their own.  In fact, this parent was working on the problem themselves for quite some time before they called me.

I understand that doctors measure complexity in mechanical ways.  Should I be doing that as an occupational therapist?  Is it correct to measure concern or complexity based on how many body parts are broken or impaired?  Do I start counting how many different ways the child is impacted?  Is it low complexity if the child just can't turn his head to one side?  Is it moderate complexity if his gross motor skills are delayed?  Is it high complexity because the parent is concerned that he won't catch the game winning touchdown pass and the Buffalo Bills will never win the Super Bowl?

Should I never consult the parents and shut out that data stream from my decision making?  Things get really simple when all we are concerned about is clockwork systems like degrees of motion in the cervical spine.  Is that what I am to be reduced to doing?

This weekend my lawnmower wouldn't start.  Single cylinder engines are pretty understandable, even for a novice like me.  The complexity is low.  I decided that it wouldn't start because the spark plug was fouled.  So I changed it, and the engine started, and the lawn got mowed.  Easy.

The lawn mower did not have a mom who was worried about whether or not her baby would make it to the Super Bowl.  It was just a lawnmower, and I think I even cussed at it once or twice while I was trying to get it fixed.    Low complexity stuff.

So as I consider this new proposed coding system that is asking me to rate complexity in my treatment of babies I think I will just protest and refuse to participate.  All of my cases are complex, and I was actually trained to consider them that way.  In fact, I was told that if I stopped considering the complexity of my patients that I might as well stop being an occupational therapist.

If I failed to consider complexity, I might miss something, and that is not an acceptable standard of care for an occupational therapist.

Occupational therapists should not be forced to be reductionistic thinkers who count up how many body parts are damaged or how many performance areas are impaired.

These cockamamie coding systems will come and go.  That is one benefit of having done this for 30 years.  I know better than to fall for the latest payment scheme and coding fad.

If the insurance company wants me to label and then fix something that is low complexity, maybe they can drop off their lawnmowers.

Otherwise, I plan on considering every single child I see as high complexity, and if your occupational therapist doesn't do the same, go find another one who will.
competency OT practice

Unknown said…
Thank you for articulating what I do on a daily basis, from my toes to the hair on my head, I care about my clients. However, when the billing becomes too difficult and demanding, my ability to care about the details of my client's families fails. On a regular basis, I remind myself that in this moment... this kid is the most important to me.
I just got the list of 3 ICD10 codes that will replace 781.3 and was told..."however, the insurance companies are not letting us know which one they will cover". I can foresee extra time being spent on resubmission and paper work for validation. Do you have any knowledge about this that may help me? I bill 781.3 for most of my kiddos currently in private practice. Thanks.
6:44 PM

Christopher J. Alterio said…
Hi Tricia,
Great question - and I wish I had an answer. The new ICD-10 is all unknown territory and I suspect that there will be a steep learning curve as we find out what will and will not be reimbursed. In my state OTs don't provide the diagnosis codes and we ask the physicians to give us that information. I foresee payment delays, resubmissions, and increased paperwork in all of our futures. Good luck to all of us!
12:39 PM