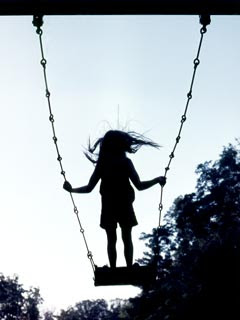 I spend so much of my professional time discussing parenting with parents - it only seems fair that I share some of my own parenting experiences.

I always feel that it is important that I tell parents that I understand their limitations because I have the same limitations that they do. I don't often get to give examples though so it seems that this is a good opportunity.
I have been thinking about the time that my daughter fractured her wrist - and I was too busy to notice. Sometimes I am not sure if time goes on around me, and events occur... or if I am actually a part of the stream itself, and time is happening with me. What I mean by this is that there always seem to be so many things going on and I grasp at those things that seem important - but it does not resolve the issues of those things that go past me. Only some don't go past - they stick to me, waiting for me to either liberate them back into the stream or do whatever else needs to be done.
Either way, sometimes when you are a parent large and unavoidable issues come rip-roaring down the stream and need to be attended to immediately. This story explains one of those times:
I sent my daughters away to my sister's care and of course the girls were incredibly indulged. It was a once a year getaway from parents and they thoroughly enjoyed it.
Sometimes I felt badly about subjecting my family to Casey, the youngest. She is so free spirited, so reckless and fearless: she really required high maintenance parenting - of course never in a bad way... just in Casey's way.
Case in point: while swinging much too high on a swing in the park, and directly under the watchful eye of my sister, she suddenly screamed out, "Look Aunt Steph - see what I can do..." and proceeded to propel herself out of the swing at it's highest point of motion and go flying through the air, landing directly upon her wrist.
I always had to be very careful of what Casey watched on television as she would try anything. The worst was watching her go flying down the stairs in the laundry basket like a sled a la Rugrats. She blew right threw the spindles on the first landing and crashed the final four feet or so to the ground without the benefit of stairs - she thought it was fun. Jumping off the swing was just par for the course.
Anyway I didn't think much of her jump from the swing, although my sister did call me in a paranoid way asking my opinion. But Casey was moving her wrist, not complaining, and ready to play some more. So I forgot about it.

I picked the girls up and got home late on a Saturday night. She complained a little that her wrist was sore, but I thought she was just feigning attention (part of the whole coming home thing, I figured). I ignored her complaints.
The next day was so busy with family obligations, the poor child got lost in the shuffle. She played with her cousins. And I ignored her a second day.
After two days I finally paid attention to my poor child. She didn't want to spend the day with me, and so I took her to daycare (where all her afterschool friends went). As a father I learned that there are times when I am just not cool to hang out with, so I learned to deal with the rejection. That morning she told me that her wrist hurt, and I made a mental note to myself to ask her again later...
So when I picked her up from daycare I again asked her how it was, and really took the time to watch her. She was holding her arm close to her body, and was using her left hand more than she usually did. Then I looked at her forearm and it actually looked a little swollen. Then I began paying close attention and actually started palpating - and found a very discrete spot over her distal radius that was extremely tender to even the slightest pressure.
I looked for black and blue marks and could not find any, but the swelling was notable. Her MD wouldn't see her until the morning, and by that point I was feeling horribly guilty about my inability to function as a parent so I made her a fracture brace to hold it into place until the orthopedist casted her.
The primary MD appointment was the next morning at 9am, at which time we would get xrays. But I saw this a hundred times before, and I didn't even need x-rays. I knew that she had a Colles' fracture.
Casey forgave me that night, touching my face as I tucked her into bed. And she loved the fracture brace I made. It is a tangible thing that made her feel like Dad was taking care of things. Poor Casey found some limits (due to pain associated with using her arm). And I guess I found some of mine too. I just can't believe that I let them slide in such a way that it had an impact on her.
My redemption occured when the orthopedist let her use the fracture brace for a couple weeks rather than casting. The fracture was not serious and the brace served the purpose.
It allowed me to re-earn the whole SuperDad designation again. My reputation needed a revival of epic proprtions. At least if I was going to deserve her anyway.
parenting