The OTD Mandate and The Great Pumpkin 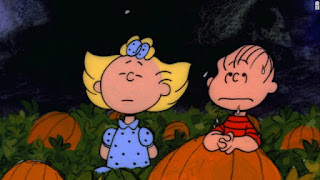 It is near Halloween, so a themed entry seems appropriate.

We have another motion in front of the AOTA Representative Assembly to mandate an entry level doctoral degree - even though a decision point was reached just six months ago on this same issue.  At that time, the decision was to support dual entry at both the master's and doctoral level.

That did not satisfy a Small Group of individuals, and so we are at the debate again.

People frequently ask me 'why' the profession is going through this again.  That is where the Halloween story comes in.

Each year, despite overwhelming evidence against his belief system, Linus would sit in the pumpkin patch and wait for the arrival of the Great Pumpkin - who he believed flies around and gives toys to sincere and believing children on Halloween eve.  Each year the Great Pumpkin would fail to appear but that does not stop Linus from believing.  Sometimes he even manages to convince his friends to sit in the pumpkin patch waiting with him.  It always inevitably ends in disappointment.

This is very similar to the OTD mandate.  There has been overwhelming opposition to this but we have been told by some members of the Small Group that they will continue to submit motions to the Representative Assembly on this issue.  Now we sit on Halloween eve and another motion on this issue that was already decided is in front of the Representative Assembly.  The Small Group sits in the pumpkin patch, waiting for the Great Pumpkin to bestow gifts upon them since they hold these sincere beliefs.

Of course there is no Great Pumpkin.  And if there was - no one wants it anyway - that has been proven repeatedly by survey after survey on the issue.  Still the Small Group waits, hopeful that something will change that will fulfill their deep wishes.

It is lonely and cold in the pumpkin patch each year, particularly since so few of Linus' friends believe in what he is doing.  His belief system might be ok on its own, but he keeps dragging friends in with him, ruining their Halloween.  That is the unfortunate part.  He is always unrepentant in the end, but I suppose we can at least acknowledge his faith, even if it is out of step with what everyone else believes.
OT Education