You can't keep a good event down...

...but you might delay things just a little while because of winter weather!

Today a gathering was scheduled in Clifton Springs for a celebration of the occupational therapy founding.  The mayor was also scheduled to issue a proclamation but the celebration had to be postponed due to inclement weather.

The event will be rescheduled.

The March 8. 1917 Clifton Springs Press had an announcement about the upcoming First Consolation House Conference, but it also had an interesting article about George Barton.  The subheadlines and text of the article are notable because they provide direct evidence of exactly how the Clifton Springs community felt about his efforts and also how influential he was. The article quotes an unnamed folk source as saying, "You can't keep a good man down, especially when he runs an elevator for a living."  The newspaper editor goes on to state "and in no instance has the editor found opportunity to apply this witicism, where it was found more appropriate than in the introduction of George Edward Barton, A.I.A., a resident of this village, who is known by many, and who but few, really know."

Barton's disability is described in detail, as is his effort to overcome those difficulties and help other people. 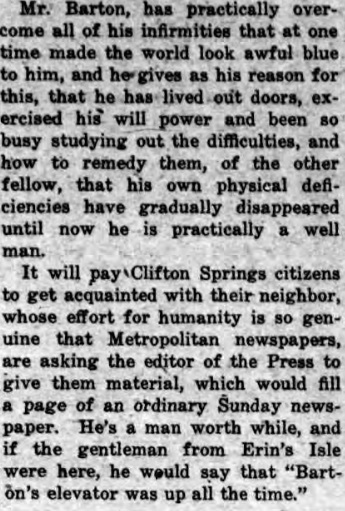 We all look forward to the rescheduled celebration of George Barton and his efforts in Clifton Springs that founded the occupational therapy profession.

"You can't keep a good event down!"