The Case of Lena, Part III: George Barton's promise to help others who were in pain 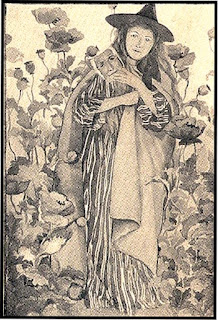 The original book "The Counterpane Fairy" was written and illustrated by Katharine Pyle in 1898.  It is a fanciful story of a fairy who visits children in their beds as long as they do not cry.  The fairy brings some comfort to these children and has the ability to magically transport them away from their circumstances if they focus on one of the squares of their counterpanes (bedspreads).

Occupational therapists may not be aware of how this story is relevant to the profession's history.  This post will conclude the exploration of 'The Case of Lena' and explain how Pyle's story influenced George Barton.

Barton did not write much about children but as previously noted he was struck by the 'Case of Lena' and that prompted him to write to his newspaper's editor in January of 1920.  It is hazardous to guess a person's motivation from such a distal historical vantage point, but we do know that Barton referred to Lena as "a very real and dear little girl" whose situation required attention.  We also know that Barton despised confinement  in the sanitarium and that he also was previously in deep despair over his life circumstances.  As described by Elwood Worcester (1932) "When I first saw George he was in the spiritual condition of a mad dog.  He blasphemed God for bringing such misfortunes on him, and cursed me roundly for daring to think I could help him."

It is important to consider the time frame when 'The Case of Lena' appeared in his newspaper.  The NSPOT meeting occurred several years prior in March of 1917 and he passed the reigns of the society's presidency to Dr. Dunton in the Fall of that same year.  His work at Consolation House continued, and at the same time that 'The Case of Lena' was published in the local papers George Barton was likely thinking about children of his own.  George Barton married his secretary, Isabel Newton, on May 6, 1918.    His son, George Gladwin Barton, was born on October 16, 1920.

He had already experienced how his own tuberculosis contributed to his previous wife and child leaving him (Worcester, 1932) and he read the story about Lena's father who also had tuberculosis and now how Lena might need to be removed from the home and how a newborn child might also be at risk.  Barton knew how tuberculosis shattered families - from personal experience and from reading the stories of others.

For George Barton, tuberculosis caused pain.  And tragedy.  For adults and children.

In 1920, in context of all of these events, George Barton wrote another article for The Trained Nurse and Hospital Review.  The article was called "The Counter-Pain Fairy.  I have not seen any mention of it in any previous summaries of Barton's writing or regarding occupational therapy history.  Exploring the relevance of Barton's fairy tale is necessary.

I attempted to find some connection between George Barton and Katharine Pyle but at this point an uncertain if they knew each other.  They used the same publisher (Houghton, Mifflin, and Co.) and certainly they may have been in similar social circles.  Katharine Pyle lived in New York for four years in the 1890s but at this point I do not know if she could have offered any 'blessing' upon Barton's use of her work but will update this space if I can locate any information.

Barton, as he was wont to do, engaged in word play with 'counterpane' by re-naming the story "The Counter-Pain Fairy."  Unlike Pyle's story, Barton's fairy achieved her magical powers and ability to help others through self-sacrifice.  Barton's fairy (first just a princess) was overcome with sadness at the sight of a little girl who had lost her legs and so arranged to have her own legs removed so that she might gain magical powers and be able to help other children who were sick or in pain.

"Then the princess understood that, if she was to help Biddy, she must lose her own beautiful legs and it just seemed as if she couldn't do it; but when she thought of all the other little boys and girls who had cried out to her, then she thought she might; and all the time she could not forget the radiant face of the lovely lady, so sweet and full of love; and 'way down in her heart she knew she would.  And she cried and cried, but still she told the Wizard that she cared enough --yes, even to give up her own two legs-- to help Biddy and all the other children...

First the Wizard (because she had loved other sick children enough to give up her own legs for them) changed the princess into a fairy.  That's how she got the name of the Counter-pain Fairy-- because she never comes to anybody but children who are sick enough to be in  bed and covered up all snug and warm with a counterpane-- (yes, it's spelled differently but its all the same thing)...


Again, it is hazardous to guess motivations but understanding context and considering other known sources there is justification for some conjecture on why Barton might write such a story and submit it for publication in the journals.  It is known that Worcester's "ministry of redemption" intervention (1932) with Barton was multi-faceted, and included admonitions about Barton's responsibility for other people.  Worcester wrote:

"He was perfectly able to return to his architecture, but by this time he had discovered a new form of architecture which he greatly preferred to the old-- building up again the broken lives of men and women who were suffering as he had suffered, under the eye of Doctor Mumford and the physicians of Clifton Springs.  With the help of a few rich friends he built his "Consolation House" and equipped it with splendid workshops, where, through the sweetness of his new personality, and his knowledge of crafts and arts, he did a wonderful work for years... More than once he has told me that his sickness marked a turning point of his life for good and that he would not have missed one incident of it.  How often this happens!  How frequently the sorrows and misfortunes of life turn out to  be God's messengers to us which close the old doors and seem to end the past, in order that we may find our way to the future, to the new life God has held in reserve for us."


Quiroga (1995) identifies Barton as a zealot but it is important to consider his motivation in context.  Rothman (1994) documents the spiritual context of tuberculosis sufferers:

"Evangelicalism had a particular appeal for invalids, and its influence in their life histories is marked.  Weighed down by the burdens of disease and deeply apprehensive that their present afflictions were punishment for past sins, many of them participated actively in the revivals.  The experience not only provided personal comfort but enabled some of them to turn a vagabond life and voyage for health into a spiritual Odyssey."


Isabel Newton, Barton's wife and Consolation House partner, wrote (1917) "The Rev. Elwood Worcester, of Emmanuel Church, Boston, convinced him that perhaps living was not worth the effort for himself, it would be worth while to get well for the sake of the "other fellow."  With this idea he started out to discover what could be done for that "other fellow," the other sick man.

Barton's fairy-tale "The Counter-Pain Fairy" has not previously been mentioned in the occupational therapy literature.  In context of Barton's loss and recovery and the pending birth of his own child it provides an interesting perspective on his reactions that were published in response to the sad story of a little girl from his area who would be forced to enter a sanitarium for treatment.  To him, Lena indeed was "real" and the problems associated with her disease required attention.  Helping others was as important as a promise to him, and he took it very seriously:

"And that's the story of how the princess was turned into the Counter-pain fairy, and why she will come to see you if you really want and need her.  Only you mustn't forget the conjuration, as the Wizard calls it; and, of course, you really mustn't cry; and you mustn't forget to promise twice because that makes it a real promise."