December 02, 2014
The following Twitter conversation underscores the problems with use of a population health model in an occupational therapy context:

Framing a conversation about the need for older drivers to consider their abilities underneath a context of population statistics is in direct conflict with the profession's Core Value of respect for patient autonomy and individuality.

Although it may be true that there are descriptive statistics about driving safety, numbers of accidents, and other factors associated with elderly drivers, when we lead our conversations with talk about the broad population we are adopting a potentially ageist stance that restricts the freedom of many drivers who are not falling within those normative ranges.

This is the problem with use of a population health model for meeting the needs of individuals.  To describe this problem within a general systems theory framework, consider the following chart: 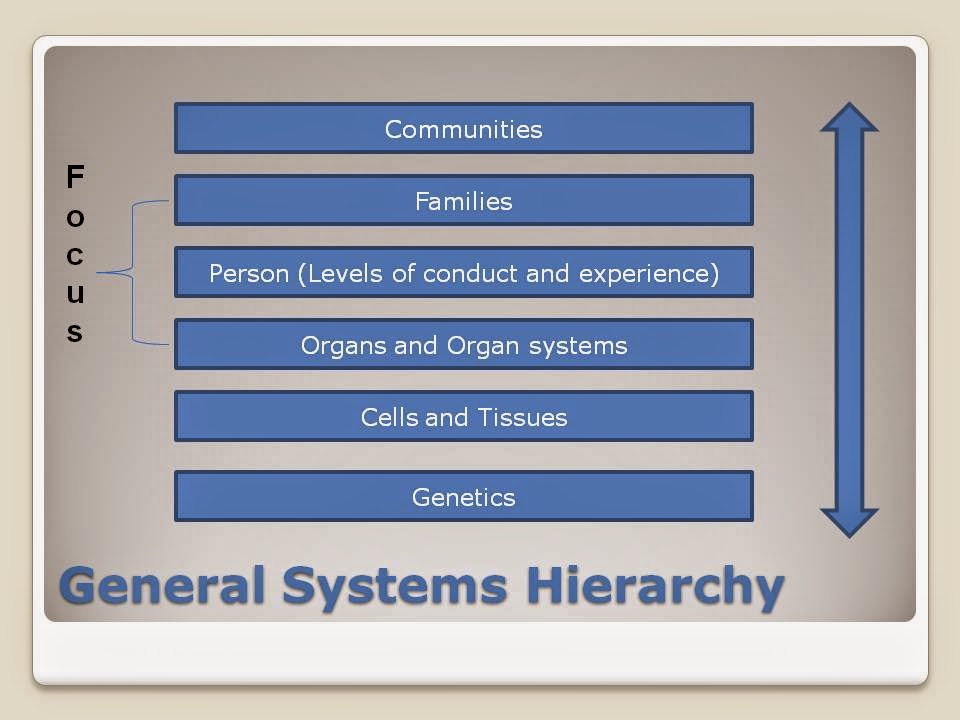 Within this traditional framework of intervention, the correct focus and domain of concern is centered around the individual person.  Due attention is given to levels above and below the person because of their contextual relevance, but the focus of concern is the person.

Now consider a shift toward a population health model, where the focus and domain of concern is centered around the community: 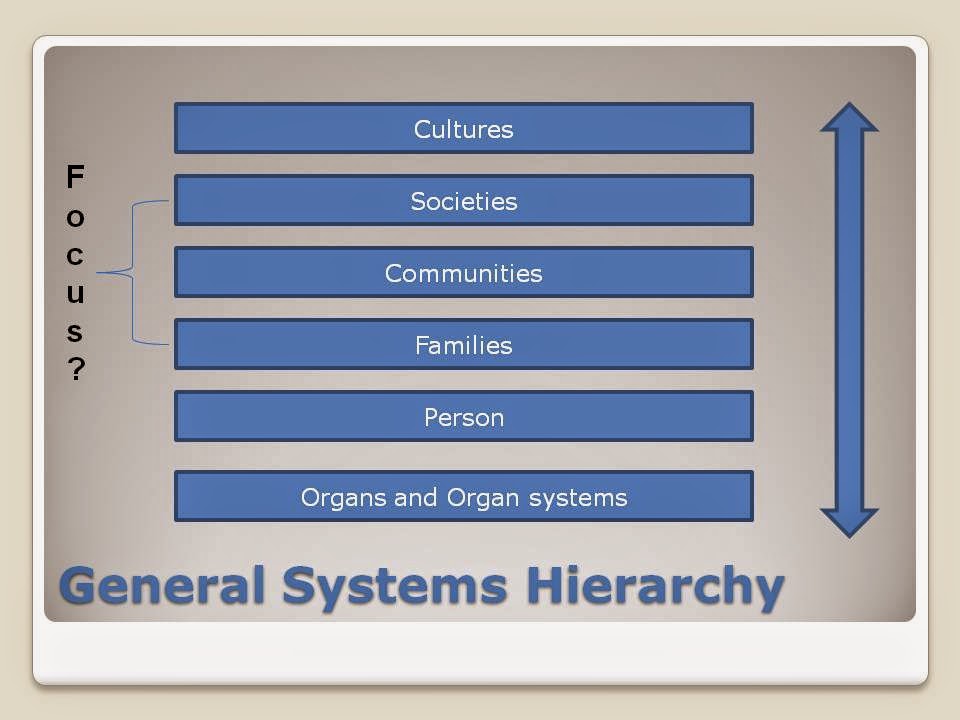 In this type of public health framework the ability to focus attention on the individual and their abilities and their autonomous choices is lost.  This is why people state that public health models are inherently paternalistic and are not considerate of the needs of individual people.

The ethics required for supporting action in each scenario are radically different, and you can't populate a health care profession with a competing set of ethics where one focus respects patient autonomy and the other focus promotes paternalism and concern for a 'common good' that might not respect individuals.

Population health models are focused on broad community needs and frame concerns in broad population statistics.  It is philosophically incorrect to lead into an issue citing population statistics and then follow up with statements that individual assessments need to be considered.

What is the message?  Based on current life expectancies in the US, do people hand in their car keys when they are 70 because our population statistics indicate that this is when the elderly population statistically begins demonstrating concerns?  Will occupational therapists become the gatekeepers for driving, based on their assessment of abilities?  Will they solve those problems by paternalistic messaging that once you are 70 you are automatically placed in that high risk pool?

Occupational therapy was a profession that was established to help individual people when they had illness, disease, or disability so that they could productively engage in their lives.  Now there are some therapists who are trying to be gatekeepers to population health, wielding statistics and clipboards to make broad recommendations about when people need to start giving up their freedoms and autonomy.

It is a disturbing philosophical turn that breaks our social contract with the people who would come to us for help.
Disability rights OT practice philosophy

Erin Phillips (phillipserina@sau.edu) said…
Dr. Alterio, love this conversation and am hoping it will continue…here are a few of my thoughts… I support your view that population based models extinguish the client centered approach that defines the profession of OT…however we, as a profession, also need to remain open to the possibilities that our role is in a process of evolution…from Dunton in 1915 stating “Another purpose of occupation may be to give the patient a hobby which may serve as a safety valve and render the recurrence of an attack less likely”. To Ann Grady (1995), “the promise of occupational therapy lies in our ability to continuously combine the mandates put forth in the early tenets of our discipline with our constantly changing practice”…we are being called (as I believe it) to provide the very client centered, occupation-based services grounded in our profession, our history, our ethics, in order to address current health care needs and amend the failings of a prescriptive medical model and an education based population model of care. How many times have we heard “people know what to do…they just don’t know how to do it”…Both models have provided society with the information, facts, and statistics about health and lifestyle behaviors, but have failed in guiding the individual toward making and sustaining change in daily habit and routines, necessary to impact their health. A difficult process for individual change amidst a community behaving differently. Swimming upstream perhaps…but it can be done. It is my belief that by using our PEOP perspective we can provide preventive services on an individual level, that will in turn improve the health of our families and our communities. A “trickle up” policy perhaps? These are just some thoughts as I have been investigating the use of coaching as a model for OT in prevention services as part of my own doctoral work.
1:11 PM

Christopher J. Alterio said…
Thanks so much for your comments Erin. I think you make a compelling case that supports the concept of evolution. I just want to see any evolution make sense for us from a theoretical framework and in pragmatic reality. I believe that we are making incremental changes in fundamental concepts without really addressing the philosophical inconsistency that happens as a result. I view this as kind of like a second paradigm inconsistency all over again, but this time moving up the GST hierarchy instead of down!

Also, we have some real pragmatic issues to tackle at the same time (health care systems, etc). If we move too suddenly away from our philosophical base as a health care profession to embrace something new (a population health profession), what happens if the changes in systems revert? That is why I have concerns about investing too much in a socialized concept of public health in the American context. I am just not convinced that we are really going to go that way at this time, even though we have taken some steps in that direction.

An interesting example is that AOTA is really pushing the concept of primary care. When asked, it is difficult for them to provide any hard data on whether or not this is even a measurable practice area. Yesterday one of their BoD members was on Facebook trying to find evidence of anyone working in a primary care context. There was not much evidence to be had.

Now I have nothing against primary care; in fact, I view my private practice as a form of primary care. However, we don't even have enough of our workforce in private practice to even talk about finding our way into community-based primary care. The limitation is pragmatic, and having AOTA strategize from the stratosphere makes for interesting academic conversation but it just has no traction in the real world yet.

Clinicians are attempting to deal with a very different set of problems that have nothing to do with primary care models or population health. That is why the AOTA initiatives around these changes will continue to fall flat. These AOTA interests help drive entry level students get excited about new ideas, but a lot of that gets lost as soon as those students bump into the reality of reimbursement structures for Medicaid or Medicare in a traditional context. Suddenly, population health becomes an interesting idea that belongs in think tanks while clinicians identify that the real work is what they face every day.

So changes may be in order, and in fact changes may one day come - but there will need to be structures and models in place to make those connections to the everyday realities of what actually happens in practice.
2:54 PM