George Barton was diagnosed with tuberculosis in 1901 (Reed and Sanderson, 1999) and he traveled to Colorado some time after that.  I could not confirm the exact dates of his travel but an educated guess would be sometime around 1907, because his architecture practice with Sturgis was listed as  being active up until that approximate time (AIA, 1914).

It is difficult to know exactly what brought George Barton to Colorado - it could have been his own "chase" for a tuberculosis cure or it could have been that he had political connections with the Colorado governor, John Shafroth who was a member on the Committee on the Philippines in the 65th Congress and prior to that was a Colorado representative and frequently involved in US-Filipino relations. Reed and Sanderson document that the Governor commissioned Barton to investigate factors related to famine along the Kansas Border (p. 423).  It is possible that Barton was acquainted with Shafroth prior to his move to Colorado because in 1906 Barton's architectural firm in Boston designed the St. Mary and St. John Cathedral in Manila (Far Eastern Review, 1906).  Here are some pictures of the beautiful St. Mary and St. John Cathedral in Manila: 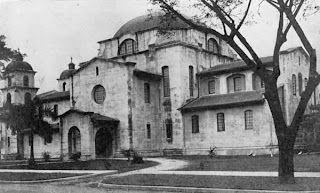 And here it is following the Battle of Manila in 1945: 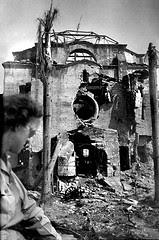 Barton had several health setbacks during his early working years.  Tuberculosis was a major public health concern at the turn of the century.  Antibiotics like streptomycin were still 50 years away from discovery - so people used a variety of other methods to find a cure for their condition.  'Climactic therapy' was a popular approach and reading scientific papers of that time period provides fascinating perspectives and insights on what drove the social behavior of 'chasing the cure' (Hinsdale, 1913).  During this time, a diagnosis of tuberculosis caused people to move themselves into sanatoriums where they could convalesce.  The high incidence of tuberculosis spurred travel to places like Saranac Lake, NY, and Colorado Springs, CO.  Below is a video that shows a treatment facility (in 1933) that was near Colorado Springs and gives a pretty good idea of how this treatment was conducted at that time.


At the turn of the century, tuberculosis treatment was a primary economic driver for the Colorado Springs community (Vail, 2012).  It is possible that George Barton went to Colorado Springs directly related to his 'chase' of a cure, just as many people at that time did.

At some time in 1912 he had convalesced sufficiently that he was again practicing as an architect.  He is listed in the Colorado State Business Directory listings as an architect from 1912-1914 (Architects of Colorado, 2006).

George Barton left a measurable impact on Colorado architecture.  Winfield Scott Stratton was a philanthropist who became rich in mining and prospecting.  When he died he made arrangements for his fortune to be used to establish and maintain a home for poor people. That home was named in memory of his father, Myron Stratton, and was designed by George Barton.  Below is a video that explains the founding and legacy of the Myron Stratton Home:

Here is an original print of the home as it was in 1916 near the time that it was opened:

And here is a closer view of the main building, although this picture was taken in 1930: 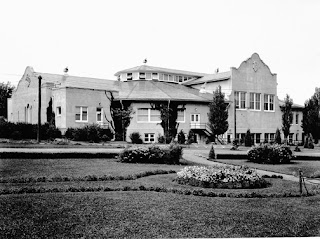 Following his work on the Myron Stratton Home, George Barton was asked to redesign Cragmor Sanitorium, a major tuberculosis treatment facility (UCCS, Cragmor, n.d.).  In January 1913 it was apparently determined that Barton's design was too costly, and so another famous architect, Thomas MacLaren, re-worked Barton's designs (UCCS, Building History, n.d.).  The Cragmor Sanitorium still stands, in some measure reflecting Barton's design, but is now the Main Hall of University of Colorado Colorado Springs. 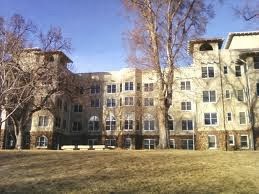 Barton's architectural work was notable and he contributed to important and beautiful buildings that were constructed in places including the Philippines, Colorado, and of course in his native Boston.  His designs were intricately related to his own illness, his own chase for a cure, and his own recovery.

Architects of Colorado (2006). Database of State Business Directory Listings 1875-1950 compiled by J. Palmer and I. Bergsmann.  Retrieved online at http://www.historycolorado.org/sites/default/files/files/OAHP/Guides/Architects_Colorado_Database.pdf