n.b. ongoing series related to a study of George Barton, founder of the Occupational Therapy Profession.

By my reckoning, it is probably impossible to conduct a study of an event without studying the context in which that event occurred.  Here I suspect that occupational therapy colleagues reading this will understand the bias of the author as he attempts to become a historian.  As clinicians we have well established practice frameworks like the P-E-O model (Law, Cooper, Strong, Stewart, Rigby, & Letts, 1996) that explicitly state that the behavior can’t be separated from its contextual influences. Additionally, this model re-introduced the importance of history-taking for establishing personal contextual relevance for clinical reasoning. Similarly, the Lifestyle Performance Model (Velde & Fidler, 2002) takes a congruent approach by completely embracing phenomenology as being the only possible method for understanding the personal contextual relationships between an individual and the occupations that they engage in.

So it is with this bias that I approached this task of re-constructing fragments of information so that I could better understand why George Barton was the man that he was.

As indicated in the last entry, we know that Barton was born in 1871.  We know that his father was a banker and that his family had some connection to other famous Boston families.  He studied in the Boston public schools and at that time architectural education was accomplished primarily through apprenticeship as formal training programs in Universities were just beginning to be formed.  At that time it was common for parents to secure an apprenticeship for their children and that model of pupillage, in combination with emerging organized architectural education, was a primary means for entry into the field (Crinson & Lubbock, 1994).

Several sources document that Barton was sent to London, England where he was apprenticed to William Morris and other notable Victorians including Sir Hiram Maxim and Henry James (Gifford, 1989; Licht, 1967).  At that time, the effects of industrialization on local artisans was profound in that machinery was replacing the handiwork of craftsmen and textile workers.  William Morris was a leading figure in the Arts and Crafts Movement which was a response against industrialization and its impact on Victorian interior design.  A classic Morris quote that captures the spirit of the movement and is oft-repeated is

If you want a golden rule that will fit everybody, this is it: Have nothing in your houses that you do not know to be useful, or believe to be beautiful.


When considered within the context of classic Victorian interior design, it is easy to understand the simple messages embodied within this statement.

William Morris was passionate about Illumination Manuscript and apparently introduced Barton to this art form.  This is a sample of original Illumination artwork created by Barton that was found amongst some of his possessions: 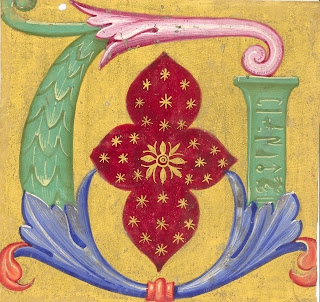 On the back of this artwork are some notes written by his wife, Isabel (Newton) Barton: 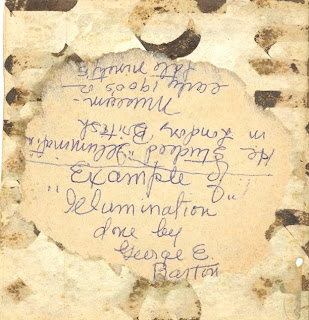 I was unable to find any evidence of Barton artwork or design that has ever been previously published.


George Barton was strongly influenced by Morris, and when he returned to America he became the first secretary of the Boston Society of Arts and Crafts.  The purpose of this Society as reported by Eaton (1949) was as follows:

The Society of Arts and Crafts is incorporated for the purpose of promoting artistic work in all branches of handi­craft. It hopes to bring designers and workmen into mutually helpful relations, and to encourage workmen to execute designs of their own. It endeavors to stimulate in workmen an appreciation of the dignity and value of good design; to counteract the popular impatience of Law and Form, and the desire for over-ornamentation and specious originality. It will insist upon the necessity of sobriety and restraint, of ordered arrangement, of due regard for the relation between the form of an object and its use, and of harmony and fitness in the decoration put upon it.


The Society was incorporated June 28, 1897. It is still in existence today.

Upon completion of his apprenticeship, George Barton worked in the architectural firm of Cram, Wentworth, & Goodhue, of Boston.  Around 1895 he went on a tour of England and France, with the special purpose of studying the domestic and church architecture of the smaller cities and towns (Brochure Series, 1895).

Early in his career he won the Shattuck Prize for Industrial Homes (Barton, 1947).  In 1902 Barton partnered with R. Clipston Sturgis and together they formed the architectural firm of Sturgis and Barton which continued until 1907 (AIA, 1914).

This is the known history of the beginning architectural and design work of George Barton.  His interest was nurtured through apprenticeship in England and he was significantly influenced by Morris and the Arts and Crafts Movement that he brought back to the United States, where it still persists today in both the occupational therapy profession as well as in the Boston artisan community.

Barton, I.G. (1947, May 16). "Talk Given Before the Western New York Occupational Therapy Association at the Clifton Springs Sanitarium."

Morris, W. (1880, February 19). "The Beauty of Life," a lecture before the Birmingham Society of Arts and School of Design.

Monica Moran said…
Hi Chris,
do you know anything about Barton's later life.

I am posting in a (mostly) chronological order, so posts about his later life will be forthcoming. They are all under the 'history' tab in the right column of the blog.

Do you have a specific question I can answer for you now?