Historical roots of occupational therapy: It is easy to forget

History became legend, legend became myth – and some things that should not have been forgotten … were lost.

In Glen Gillen's Slagle lecture at the 2013 AOTA conference he stated "We need to reclaim what we do..."  This is not the first time that there has been a call back to our roots - we periodically re-visit this theme in occupational therapy.  In order for us to develop a plan to 'reclaim what we do' we need to KNOW what we did.  And why we did it.  And what set us on the path to begin with.

In a previous entry in this series I showed how Dr. Licht went searching for some of that history.  After receiving a response from Mayor Copeland, Dr. Licht felt like he had struck a gold mine of historical information that he did not previously have: 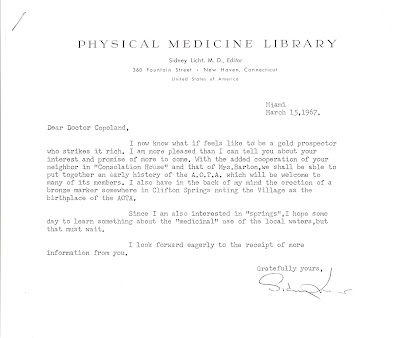 Also, as Dr. Licht had receipt of contact information for Isabel (Newton) Barton, he quickly sent her out a letter as well, eager to learn as much as he could about that early history. 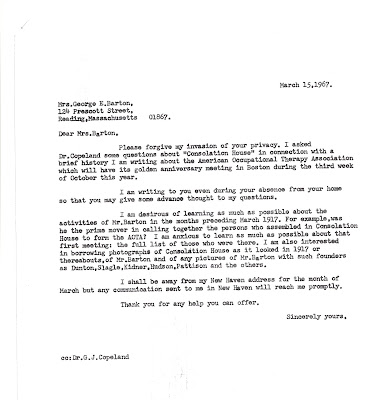 I have no record of other correspondence between Dr. Licht and Mrs. Barton, so it is difficult to know how Mrs. Barton came to write her own article in 1968 or indeed how she came to attend the 50 year celebration of the profession's founding in Clifton Springs and dedication of the plaque in front of Consolation House.  I don't know if she was prompted to re-engage by Dr. Licht's correspondence or if she was contacted separately by others; that story may be buried in files at AOTF and someone else may have that answer.

According to Mrs. Barton (1968), "With the death of George Edward Barton in 1923 came the end of activity in occupational therapy at Consolation House."  It is difficult to know how involved she was with occupational therapy following his death, although some of these threads will be explored in future entries.

Death creates an emptiness - and that emptiness is either a gaping wound or just an absence, depending on your perspective.  In emptiness we lose details, and our memories fill in information of what we have heard, and that is influenced by what we have thought.  This is how quickly  we lose our history - and then our history can become legend as the story gets changed in the re-telling.

Mayor Copeland quickly corrects his previous correspondence and indicates that George Barton actually was NOT affiliated with the Clifton Springs Sanitarium, but as we now know, his efforts to establish Consolation House were entirely his own and were not at all related to the nearby Sanitarium: 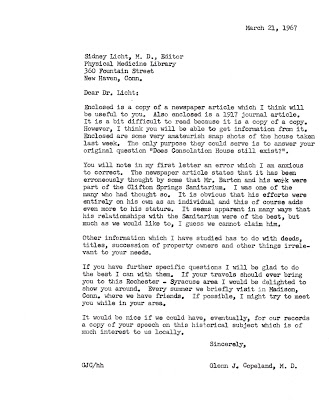 So in the years following George Barton's death, it is not clear that information about him was widely disseminated or documented.  Of course Mrs. Barton held most of that information, but other details were held by community leaders and former contemporaries - but it is evident that information becomes blurred in the re-telling and in fact partially forgotten.  This is how we approached the 50th anniversary of the founding of occupational therapy and it was at that time that we were beginning to lose the details.

The efforts of many people in 1967 and 1968 led to another re-telling of the Consolation House story and a documentation of what was becoming lost.  These documents are evidence of that process of re-discovery.

As we approach our Centennial as a profession and as we again look toward our roots so that we can 're-claim what we do,' I hope this will serve as an even more complete re-telling of the George Barton story.  In 50 more years, I hope that we will not be accused of almost forgetting.