The meaning of a barrel 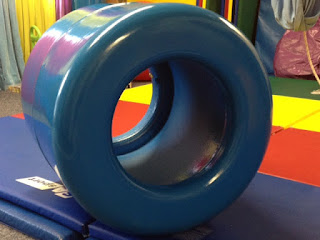 I would like to introduce you to my barrel.

One of its principal identifying characteristics is its blue color.  Although I haven't done the math to determine whether or not it is of optimal dimension (a la Keppler) I have always considered that it is the precisely correct size  for many purposes.  Toddlers can stand it it quite well and not be overwhelmed by its height, and although that is no confirmation by differential calculus it is a pragmatic measure that I have always appreciated.

So what is the meaning of a barrel?  To Keppler it was an obsession based on not wanting to be ripped off by a wine merchant and it ended up feeding his thought process that led to our understanding of planetary motion.  That intrigues and amuses me more than I can probably express.

For me the meaning of my barrel is both personally and socially derived, just as described by Hasselkus (2002, p.3).  I purchased the barrel when I was working at another facility as a very young therapist.  Some months after I left that facility I received a phone call from the Director who offered to sell me a lot of the equipment because the clinic was closing.  For a modest donation I was able to purchase the barrel along with a lot of my other equipment that is still in my clinic.

I was thinking about this because yesterday I was playing with another child in that same barrel - another toddler - but this one had Erb's palsy.  The goals remained the same though - improving lower extremity strength, improving control of an extremity, improving confidence and understanding of how to plan movements through space.  I guess I do a lot of the same things that I did 20 years ago.  At least the stuff that works.

So in between these years many other children have also used that barrel.   Zachary rolled on it.  Aaron threw Beanie Babies into it.  Heather straddled it.  Nicholas crawled through it.  On and on.

What strikes me most though is that Brittany is technically old enough to be a mom, and maybe she is bending at her knees and maintaining her balance and using her hemiplegic upper extremity to pick up her own child.  If that is true, then that means that the barrel has really accomplished something.

That is not a bad thought to help push you through a day.

Barbara TherExtras said…
Well said & very entertaining, Chris. However, I give you all the credit, not the barrel.
6:51 AM