Narrative analysis and meaning making in the face of vicious cycles. 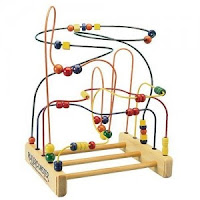 Melissa is a happy three year old. She smiled brightly as she played with the 20 year old bead and wire toy in my waiting room. I am amazed at the durability of this toy that was originally a favorite of my oldest daughter. It has been played with by thousands of children over many years. Melissa talked quietly to herself as she slid the beads along their paths. Some of those paths are rather uniform and follow a predictable and simple geometric trajectory. Other paths twist, turn, climb and dip unexpectedly. All of them begin on one side of the toy and end on the other side of the toy.

Melissa's grandmother usually brings her to occupational therapy but her thirty-something year old father also began coming to therapy sessions. He was recently released from prison and a mandatory rehabilitation program. He has a long and repetitive history of substance abuse and criminal behavior. No one knows where the mother is.

Based on conversations we have had, Melissa's grandmother is heartbroken. That has nothing at all to do with her love for her granddaughter - but is more reflective of the love for her son who has disappointed her at every possible turn of his life.

At the end of the session cherubic Melissa hugged my leg goodbye and smiled as she grabbed her grandmother's hand and walked down the stairs toward their car. The father watched the scene as if it were a movie playing out in front of him. I saw pain and worry in his face as he told his mom that he would join them shortly.

After a moment we were alone in the waiting room. "Dr. Chris," he haltingly asked and worried, without much eye contact. "Is it too late for me to connect with my child?"

The question landed heavily on my shoulders and I felt the struggle in my knees as I shifted my efforts so I could find something meaningful to say.

"Of course its not too late" I answered automatically, not knowing exactly where the answer came from. I paused as I heard the reverberation of the assurance in the waiting room. I wondered if I was dispensing fact, or opinion, or maybe it was just hope.

I told him something about the importance of continuing to participate in his daughter's therapy and medical appointments. I told him that constancy is important to preschoolers and that everything he did on a daily basis with her was important. I said some other things.

It was hard to tell if my assurances had any chance of breaking through the curtain of fear and the sense of failure that surrounded him. He heard me, I think, because he shook his head in acknowledgment of what he already knew he had to do - and in some shame of how he had failed in his responsibilities up until recently.

I believe in redemption but I know it does not happen frequently. As he ran with an urgency out of the waiting room to his daughter I wondered if he would find it.

I turned to tidying up the waiting room and couldn't shake myself from the interaction. I looked at the toy, and some of the beads hung suspended in the middle of the wires along their paths. As I moved the toy to the table I pushed all of the beads so that they were neatly arranged at the termination of their paths, because that is where I willed them to be.

I moved those beads, even though I know it really isn't that easy. But I wish it were.
OT practice parenting

Unknown said…
Touching story. Sometimes we have to carry the torch of hope when others are unable to carry it themselves. I hope this is one of those situations that turns out well and allows us to keep hoping :)
10:32 PM

Unknown said…
Thank you for sharing such a touching story...
1:25 PM

Alyssa said…
What a great story. It has so much emotion behind it. An experience like that just goes to show how much not only our clients look up to us to provide support and answers but also their families. Its never too late for second chances and hopefully you were able to instill even a little amount of hope that father needs to continue his effort to reconnect with his daughter.
6:56 AM