Book Review: Tuck Me In! 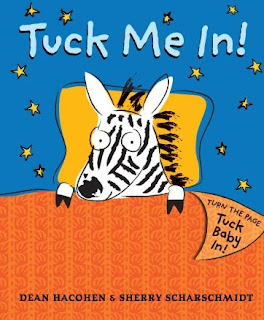 I received an email from a children's author asking me to take a look at a book he recently co-authored. The book is Tuck Me In! by Dean Hacohen and Sherry Scharschmidt. Dean was hearing some feedback from parents that the book was nice for toddlers who were developing fine motor skills and he was interested in my feedback. He was kind enough to have his publisher forward me a review copy.

I was interested in Dean's book because I am interested in habits and rituals. I spend a lot of time thinking about algorithms that can be programmed to simulate dynamic adaptability in generating non-automated responses to unpredictable environmental stimuli. I think about this stuff a lot because of the typical behavior of toddlers and the clinical behavior of people with autistic spectrum disorders. I sometimes think someone might ask me to be a software consultant for unmanned Mars missions so that is always another reason to keep my thinking sharp. You never know.

Anyway, typically developing toddlers tend to generate automated behavioral responses to environmental change - perhaps because of meta-awareness of lack of control that is associated with emergence out of pre-operational thought. It is helpful for toddlers when the world is predictable and as they realize that they have very little control over what is going on you tend to see patterns of behavioral rigidity and preference for ritual. In these situations adherence to ritual is paradoxically used as a temporary point of dynamic adaptability. As children get older and master the rules that dictate Universe operations they tend to lose interest in rigid behavioral patterns. Mostly.

Children who have autism spectrum disorders have the same adherence to ritual, but generally not because of the same reasons of typically developing toddlers. I've read some interesting literature that talks about using VC/VS gamma capsulotomy to interrupt impaired neurological pathways in people who have OCD (Lopes, Greenberg, et.al, 2009). I don't know if we really know enough to say that these OCD hyper-ritualized behaviors are the same as autism spectrum ritualized behaviors or if we can apply this neurological model to autism. Other less neurologic gobbledy-gook reasons to explain the autism spectrum rituality are based on interesting ideas like genetically programmed behavioral patterns that support safety seeking through hazard detection and avoidance (Boyer & Liénard, 2006). These conversations are a little closer to the developmental toddler models. It is fascinating stuff, actually - and it makes me wonder about the actual continuity between neurologic models and evolutionary models. I expect that these are chicken and egg conversations.

Anyway, typically developing kids like repetitive things. So do kids who have autism. On Friday evenings when my brain is still firing on all cylinders trying to find a way to calm down I also find some comfort in the simple repetition and constancy/assuredness associated with ritual. So that is why I like reading Dean's book on Friday afternoons.

Simple words: "It's time for bed. Who needs to be tucked in?" On each page a different animal (but with the same eyes!) says "I do!" and the child gets to turn the page that looks like a blanket and tucks in each animal. I showed the book to one of my therapists who promptly said "Why didn't I think of this book?"

Parents and kids will like it. You don't need to talk about all the neurological or evolutionary stuff when you explain why it is a good book. Just tell them it is fun and that the pictures are great.

The book is simple. It is repetitive. It is engaging in involving the child in tucking in each animal. It repeats the ritual of tucking in over and over until the book ends and the child is tucked in.

After a full day with our fronto-striatal pathways firing overtime, it is just what we all need.

Anonymous said…
I have GOT to visit here more often! Loved this post and am very pleased to learn about this book!

My favorite sentence: "thinking about algorithms that can be programmed to simulate dynamic adaptability in generating non-automated responses to unpredictable environmental stimuli."

I vainly used your name in a book review that will be published on PediaStaff's site in November. :)

Kaelynn said…
I found this blog post to be very informative and a great recommendation for therapists who are working with the pediatric population. I am currently in my final year of OT school and I am taking my pediatric OT courses right now. I really like the concepts behind this book in that it provides children with the ability to work on the fine motor skills that are developing. I also think that the repetitiveness of the statements within the book are something that a child with autism, or like you said any typically developing child, would be able to appreciate. I think that a book such as this one could have even incorporated a sensory component to it. Maybe have the blanket a certain texture. Some children may like this component as well. On the other hand, those who are tactile defensive may not.
After reading this post I thought about how great something like this would be to recommend to parents as a calming and reinforcing activity to do with children before bed time. I’m sure quite a few parents read to their children at night, so using a book such as this would be a great thing to incorporate into a nightly routine. I will be going on my pediatric fieldworks in the next couple months so I will be sure to remember this book or one similar and keep it in the back of my mind. I think this would be a great recommendation to provide for parents of young children and I love how it engages the child in the activity. Are you aware of any other children’s books of this nature, or one’s that are intended to reinforce certain skills or behaviors? Thanks for this great idea!
-Kaelynn
5:39 PM

Christopher J. Alterio said…
Hi Kaelynn, thanks for your note. You might be interested in 'Social Stories' which is a concept originally (I think) developed by Carol Gray. These stories are simplistic, direct, and designed for repetition to help children who have autism spectrum disorders cope with challenging situations. They are 'home-brewed' as opposed to commercially available, but I think that some people have written 'compilations' of social stories that you can use/adapt for practice.

Kaelynn said…
Thanks, Chris. I am actually working on a program proposal for my OT Administration class right now. My group is proposing a social skills program for children with the autism spectrum disorder, and we are actually incorporating the use of social stories into our program. We are planning a six week program where the children will be read the social stories in preparation to partake in a community based socialization "field trip" such as a children's museum, the zoo, and the grocery store. Thanks for the recommendation and it's great to hear that social stories are being used.
-Kaelynn
2:08 PM

Karen said…
Thanks for the recommendation Chris. This looks good and if I can get hold of it I will be trying it out on my own (almost) toddler! Cheers, Karen
5:58 PM

Winstrol said…
Great review and looks like a great children book. Very well written and lots of useful information. Thanks for sharing and greetings!
4:54 AM