The role of occupational therapy for children who have behavioral difficulties 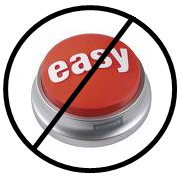 Behavioral problems in children are sometimes difficult to solve. Caregivers and even professionals often search for what I call an 'easy button' to solve complex problems. I have always believed that using a general systems methodology prevents the inappropriate reduction of complex system problems to single-point causes.

Human beings are meaning-making creatures, however, and that causes us to sometimes reduce complex data into single-points even though it doesn't make sense to do so. As an obtuse example - if you ask the average person what caused the shuttle Challenger to explode they will tell you that it was Morton Thiokol and faulty O-rings. Although that is true, it is more true that there were other factors including cold temperatures, design errors, lack of redundancy, and flawed human communication.

Anyway, my point is that humans like to find single-point answers to problems and that sometimes causes people to come looking for occupational therapy evaluations. Occupational therapists have contributed to this phenomenon by suggesting that some behavior problems can be reduced to sensory processing concerns. Many people look toward 'sensory diets' or some other prescriptive sensory stimulation program (brushing, weighted vests, auditory interventions) as single-point solutions to problems.

I was recently asked to complete an evaluation on a child and this is an edited snippet of my findings:

SUMMARY:
Priscilla is a ten year old child referred to occupational therapy to determine if she has sensory processing difficulties. Although she does have sensory processing difficulties this should not be considered the only driving force behind her behavioral difficulties or overall developmental profile. In addition she also has apparent intellectual/cognitive impairment, impaired language and communication skills, fine and gross motor delays, and she has a history of multiple foster home placements. She is functioning at a four year level in all of her developmental and adaptive skills. Priscilla requires a comprehensive developmental program to address her multiple disabilities.

4. Consider more in-depth psychological evaluation to elucidate the nature of her intellectual impairments.

After giving the evaluation to the program that made the request, I was a little disappointed to receive a phone call asking me to send a 'sensory diet' to address the child's behavior problems. Although it is true that the child had severe sensory processing problems, in my opinion it would be inappropriate to send along such a 'sensory diet' that was developed out of context from the other team members.

I asked the person making the request if the team had actually read my evaluation, because I thought it was rather clear in recommending a team-oriented FBA approach that would include multiple perspectives on the cause of behavior difficulties. I suggested a 'non-easy button' approach that would require a team meeting to review the behavior problems.

I am acutely aware that I have colleagues who would have been more than happy to suggest that the child needed a prescriptive sensory diet. That would have satisfied the single-point desire of the meaning-making humans who want a quick solution, but I fear that it wouldn't have really helped the child. Sadly, I have found over time that my unwillingness to provide a single point solution has caused people to state "he doesn't believe in sensory integration!" I am not really sure what that means, but it is a criticism I sometimes receive for not providing the single point solution on demand.

I hope that this team agrees to a meeting where we can discuss the sensory processing concerns in addition to all the other complex multi-factorial issues that are impacting this child. In my opinion this child and her family deserve this greatest possible consideration and effort.
evidence-based practice OT practice sensory integration

Let's just say that you provided the sensory diet. Who will follow up on what is working? I think an additional concern, is that "easy button" response of a sensory diet is being handed out but then never followed up on. What techniques are working and at what time of the day? You recommendation of the FBA and team meetings make so much more sense (no pun intended). This would achieve an overall picture of the child, creation of an appropriate sensory diet if needed and follow up. Sometimes I think it is great that OT is finally being understood but on the other hand (yet again no pun intended) it is not a cure all.
1:46 PM

Mendel Klein said…
There's a great book "Is it Sensory or is it Behavior." The child seems to have both sensory and behavioral issues, which might be causative of each other, or not. The quick fix generation we live in certainly does not bode well for therapists that want to take a comprehensive, non-cookie approach to treating children (i.e. "he doesn't believe in SI")

What's your perspective on OT's role in overall management, treatment and intervention of behavioral problems in children? It sounds from this post that OT became synonymous with SI, but don't we have a role to play in comprehensive behavioral interventions as well?
11:28 AM