February 01, 2010
During a conversation someone recently described a situation where they wanted to get a cart for transporting groceries from a car to inside the house. It was a phone conversation and I was listening intently, trying to understand what this odd device was that they were describing. They kept calling it a grocery cart and all I could think of was the cart that you use in the actual grocery store - that looks like this: 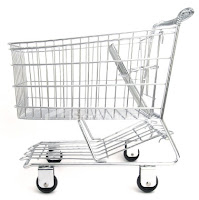 The conversation moved to other topics but later that day I got an email with the following picture, along with some gentle ribbing "Don't they have these where you live?" 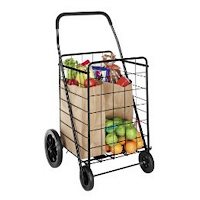 As soon as I saw the photograph I immediately recognized the product and knew exactly what they were talking about - but the point here is that there was an initial block that made it impossible for me to understand what was being described.

First of all, if someone where I live had one of those they would have to push or pull it several miles just to get to the nearest grocery store. Secondly, it would need to have snow tires. In other words, given my current cultural context it just isn't something that I see or experience on a regular basis.

This all creates a dilemma in an evaluation context though. Today I evaluated a child whose family was from an inner city environment and I found myself making sure that I was listening really closely. My own experience is wide enough and I was familiar with the environment and knew how to understand the language and the issues well. This afternoon I had to evaluate another child whose cultural context was an extreme polar opposite of the morning experience.

The shopping cart is nagging at my conscience though, and I just think that we need to be really really careful about our own cultural blinders when we do evaluations.
OT practice

amanda said…
Chris, I found this to be a very interesting post. I am currently attending a masters OT program in central NY but grew up in NYC and on numerous occasions have seen the culture difference on things. I think its really important for therapists to ask questions during evaluations and try to get the best picture possible of their client's culture and beliefs. Therapists needs to be sensitive and aware of cultural differences and be willing to learn.
4:32 PM

amanda said…
Chris, I found this to be a very interesting post. I am currently attending a masters OT program in central NY but grew up in NYC and on numerous occasions have seen the culture difference on things. I think its really important for therapists to ask questions during evaluations and try to get the best picture possible of their client's culture and beliefs. Therapists need to be sensitive and aware of cultural differences and be willing to learn.
4:35 PM