More on the occupation of collecting 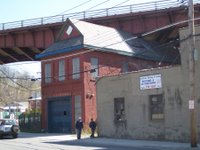 At some risk, I occasionally offer self-reflective entries that explore narrative meaning to childhood occupations. Background for this current self-indulgent essay can be found by reading about the occupation of collecting. In this previous essay I wanted to explore rule making and gamesmanship – now I seek to expand discussion of this occupation into a theme of how environment and context shape the occupational experience. Unstructured neighborhood play is not common today, and it is a significant loss for children. Imagine if I never experienced this:

During a recent trip home I visited my parents and noticed all of the things that were changing. I know that they have been changing steadily, but for some reason I recently noticed this more acutely.

The waterfront looked especially good, and as I scanned the rows of new buildings I saw one older but beautifully restored building with a landscaped waterfall alongside it. And I remembered the time that Brian and I found a dead body in that old building.

We were only ten years old or so, and each Saturday morning made our ritualistic trek down to the waterfront to scan the parking lot for beer bottle caps. We collected them, and found great joy in conducting our searches for new and different styles of caps.

The waterfront was kind of run down back then, and there were several old buildings there. I don't know what drew us into those buildings that day - perhaps it was a dare. But we went into these old abandoned buildings to see what was inside of them.

They were barely shells of buildings - I imagine that some fire long long ago had gutted them. The brick framing was still there, the windows were all knocked out and there was scattered debris all over the floor. It was a cold day, and damp, and the rushing of a nearby stream and waterfall made the coldness hang in the air. As we moved from room to room in these old buildings we laughed and joked and did the things that ten-year-old boys do.

When we turned a corner to look into one last room, we saw it. Frozen in our tracks, we saw the body of a middle aged man lying lifeless in the corner. Sometimes no words need to be said. We both looked at each other and ran as fast as we could.

We eventually caught up with each other and tried to catch our breath once outside. We decided that seeing it once was not enough – we needed to be sure of what we saw and we needed to decide what to do about it.

Cautiously, deftly, we tiptoed back through the maze of debris. The air felt a little colder, a little damper. We were SCARED. My heart pounding, I knew I wasn’t about to enter that room again, but we wanted to make sure of what we saw. We stood outside the doorway to the room for a while, trying to see past the darkness. Past the coldness. Past the dampness.

The crumpled human form was lying in the middle of a pile of wooden beams, garbage, and bricks. How would we know it was really a dead body?? Brian got the idea to poke it with a stick, to make sure it was a body. It was so dimly lit in there, and we just wanted to be sure. After heated debate and lots of “I’m not going to go in there” discussions, we decided to do the next best thing.

Brian had one of the best pitching arms in the school, so we emptied our pockets and found all the pennies. This would be worth losing a few pennies over. As hard as he could, Brian whipped the pennies at the corpse, bouncing them off of the arms, the legs, the torso. Nothing moved. It was dead all right. After the last penny bounced off the dead man’s skull, we both turned and ran again as fast as we could.

We didn’t stop when we got out of the building; we ran all the way straight to the police station. Out of breath, again, we stammered our story to the desk sergeant there. “We found… dead body… waterfront… abandoned building…” I am not sure that we impressed the sergeant, but after having us recount the incident more and more officers gathered around to hear the tale. After some private discussion, they put us into the back of a patrol car and the sergeant drove us down there.

We were released from the vehicle (both terrified and feeling trapped when we realized we couldn’t open the doors from the inside) and walked toward the building. Each time that we went into that building it got a little colder and a little damper and our hearts pounded even farther out of our chests. The sergeant asked us to follow him in and direct him to the body. We followed meekly behind, terrified, as he led the way in with his hand on his holster. I remember thinking that was odd – what was he planning on shooting? A dead body??

As we approached the doorway we knew there was no way in the world we were going into that room again. Like frightened rabbits we huddled outside the doorway and pointed into the corner toward our grisly discovery. The sergeant stepped in slowly, almost crouching, and as he came closer and closer to the body we saw him suddenly stand up stiffly.

In later discussions, Brian and I discovered that we feared the exact same thing at that moment. The sergeant had killed that man! And we found the body, so now he was going to kill us! If we could have run we would have, but we could not move. Could not think. Could not breathe.

The sergeant turned to us and began to yell, “For Christ’s sake…!” and he turned back toward the corpse and kicked it swiftly in the buttocks. “God damn it Murph, get your ass up and out of here you stinking drunk.” With another kick the body rustled, slowly rose, and shambled past us zombie-like – stinking of alcohol and drunkenness.

Walking briskly toward us, the sergeant grabbed us both by the collars and hauled us out into the daylight. We received a long lecture about the dangers of going into abandoned buildings, about wasting police resources with false alarms. But he told us he wouldn’t tell our parents as long as we promised to never go into those buildings again.

Mutely, we both nodded our heads. We finished walking our way down toward the waterfront. The day had gotten off to a strange start, but there were still bottle caps to go searching for..
philosophy

Anonymous said…
Great Story once again. I look forward to reading your entries. Keep up the good work.
10:57 PM