An OT's thoughts on Love Canal 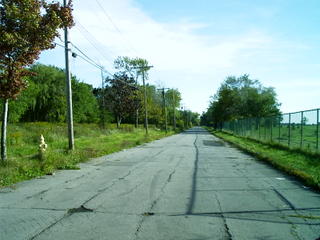 I am reduced to recycling my writing - but I have abused my responsibility to write in here so I feel the need to fill it up... I could focus on writing more if... (I won't bore anyone with excuses).

Because I have been so chipper and upbeat lately I decided to take a drive through a former toxic waste dump. Don't ask me why; I have no answers.

I don't live near this place, but it is not far to drive. Everyone has heard of Love Canal, but I felt some compelling reason to visit today - I have never been there before.

Perhaps this was prompted by someone giving me directions to their home recently. "It is on such and such street, but not on the Love Canal side." She said it with a conviction, and a hope. I didn't understand, so I decided that I better visit the Love Canal side of such and such street.
I hang out in Niagara Falls way too much. I have done some amateur anthropological studies, based on narrative searches for truth about why it is the way it is. I have theories - but I never considered the Love Canal angle.

Love Canal sits there in a corner of the city like a gaping thirty year old wound that no one talks about any more. Hooker Chemical is gone, or at least changed to Occidental. The 99th Street school has been razed, and now there is a cyclone fence that surrounds the primary canal site as if that could somehow really contain the sin that lies buried underneath. The School Board members are dead or gone, long having escaped their culpability. What remains is the obscene emptiness of the land, brown and barren except for one or two homes that hang on like the last remaining leaves on the tree in November.

I drove down deserted neighborhood streets. Sidewalks are still there. The primary site is contained by fencing, but the surrounding neighborhood is still open and accessible. You can tell that people lived there once, although there are no more houses. A little girl rode her bike through the empty streets that were cracked open, heaved up from disrepair, and with weeds poking through the middle of the pavement. It was obvious that people didn't live there anymore. Why was that girl riding her bike there? What was the pavement transferring onto her bike tires, and what was transferring onto her hands later if she had to add air into those tires?

Then I looked at the homes that surrounded the open and razed area. The dividing line appeared entirely arbitrary.. what made the land safe and the homes intact on one side of the street, and why were the homes demolished on the other? Why is the 95th St. School ok, when it is just on the other side of the creek from the Love Canal site? Do they call it the Geraldine Mann Elementary School so it doesn't sound like the 99th St. school?

Something is still wrong with Love Canal, and it is as plain and obvious as the worst human failing. If you drive through those streets you will understand.

After driving around a while I visited a former patient just a few blocks away. She is mentally retarded, and so are her parents. I don't know why they are retarded, and I am not drawing conclusions. The funny thing is that Lisa, the mom, understands rot. Her husband bought home some meat that was discounted for quick sale, and she wasn't happy. The whole time I was there she kept yelling at him, "This meat is no good, Dave. It smells, Dave. I am throwing it out, Dave." They fought about the rotten meat for ten minutes while I read a book with the little girl. Why does Lisa understand rotten meat but she lives spitting distance from one of the biggest chemical dumps in recorded history? That family won't eat the meat, because the mother would never allow it. They will all drink the water today though, and I have no idea if it is really safe.
We have all failed Lisa, and Dave, and their two retarded children.

The problem is too big for me to know how to fix. I have never understood a problem to be so large. I have encountered evil incarnate and I understand how to confront it even if it only means taking a moral high road.

But this is different. That little girl sat on my lap as we read a Lassie book, and all I could think about was driving through that empty neighborhood where children still played and rode bikes. It is so big, but you can just sense where the homes were but are no longer. As I sat and pretended to read with the little girl Lisa kept drifting in and out of a conversation with me.

After a while she didn't have anything to say, and neither did I - but the emptiness I felt was as big as the whole God forsaken Love Canal neighborhood.
OT stories